The Buddha taught that the way to extinguish desire, which causes suffering, is to liberate oneself from attachment. This is the third Noble Truth - the possibility of liberation. The Buddha was a living example that this is possible in a human lifetime.

"Estrangement" here means disenchantment: a Buddhist aims to know sense conditions clearly as they are without becoming enchanted or misled by them. 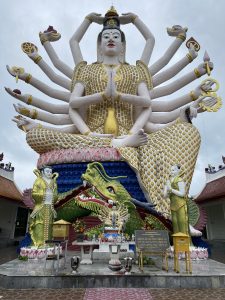 Nirvana means extinguishing. Attaining nirvana - reaching enlightenment - means extinguishing the three fires of greed, delusion and hatred. Someone who reaches nirvana does not immediately disappear to a heavenly realm. Nirvana is better understood as a state of mind that humans can reach. It is a state of profound spiritual joy, without negative emotions and fears. Someone who has attained enlightenment is filled with compassion for all living things.

When he finds estrangement, passion fades out. With the fading of passion, he is liberated. When liberated, there is knowledge that he is liberated. He understands: 'Birth is exhausted, the holy life has been lived out, what can be done is done, of this there is no more beyond.' The Fire Sermon (SN 35:28), translation by N̄anamoli Thera. © 1981 Buddhist Publication Society, used with permission

After death an enlightened person is liberated from the cycle of rebirth, but Buddhism gives no definite answers as to what happens next. The Buddha discouraged his followers from asking too many questions about nirvana. He wanted them to concentrate on the task at hand, which was freeing themselves from the cycle of suffering. Asking questions is like quibbling with the doctor who is trying to save your life.

There are currently no comments for The Third Noble Truth.