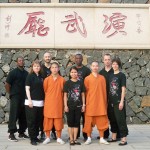 Seminars, demonstrations and trips are an enjoyable part of your training because they supplement and expand upon what you learn in class. They introduce us to a wide variety of techniques, ideas and styles.

Seminars featuring guest instructions are a tremendous opportunity to expand your repertoire and gain a greater appreciation for the vastness of the martial arts. We are fortunate at CMAC Toronto to have hosted over 25 seminars that included many of Canada’s and indeed North America’s greatest instructors.

Seminars are not a requirement but are available for all to take part in, if & when they so wish. 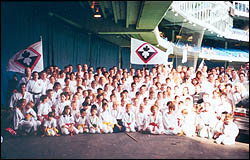 Demo at the Skydome

CMAC members have the opportunity to participate in local and international events. CMAC has performed demonstrations for the 200 Years Yonge Street Toronto Megacity Festival and Canada Day celebrations. We performed during the Beastie Boys and Edgefestconcerts at Molson Park, at the Docks Entertainment Complex, the CNE, the Chin Picnic, as well as three Skydome demonstrations for the Toronto Argonauts and 2 for the Toronto Blue Jays, and a Martial Arts Spectacular at Massey Hall and have demonstrated in Norway, Japan and China.

You may not be able to do it all, but join us where you can 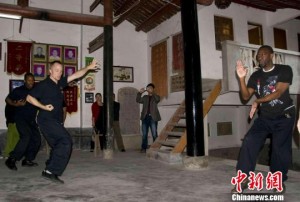 CMAC has taken 25 students to Hawaii, 35 students to Japan, 50 Students to New York, 75 students to China and upcoming trips include England, Costa Rica & New Zealand. CMAC has travelled to Japan and China to enhance its Martial Arts skills.

Over the course of our trips to Japan and China, CMAC has had the privilege of visiting Yamaguchi Sensei, the head master of Japanese Goju Ryu and over the course of our 4 trips to China (2004, 2007, 2011 & 2012) we have had the opportunity and the privilege of training at the Shaolin Temples on Songshan Mountain and in Fujian province, with a white crane grand master at the Fuzhou Wushu Association and with the Taoist Monks at the Purple Swallow Temple on Wu Dang Shan. 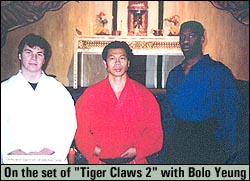 CMAC Instructors and students have appeared in a number of television shows, including: CityTV, Me TV, Vision TV, Breakfast Television, Much Music, TVO, WTN, and the Life Network, Kung Fu – The Legend Continues, Traders, Certain senior instructors are also to be seen in the feature films, Expect No Mercy, Tiger Claws II, Cocktail, Firing Squad, Prom Night, Blues Brothers 2000, War of the Worlds. These appearances serve to expose the general public to traditional martial arts in a Canadian context and connect us to the community at large.

The Lord of the Rings Demonstrations 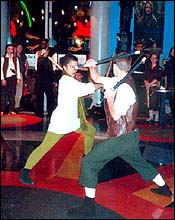 Opening at Lord of the Rings 2

CMAC was invited to demonstrate Martial Arts for the opening week of the second instalment of the Lord of the Rings Epic. At Silver City Yonge & Eglinton. In all, about 75 members from Renge, Yamazakura, Unsu, Beaches and High Park contributed to 25 shows in 5 different areas of the theatre. The audience (over 3000 people) really seemed to enjoy the demonstrations and the Cinema certainly appreciated our efforts. Well done to all those who participated. It really was an excellent display of Martial Arts powers.