A Succinct Presentation of the Four Truths

by Jigme Tenpé Nyima At the feet of the five-tufted Lion of Speech And the guru Ajita, buddha’s regent,[1] With a mind of faith, I present my crown, As I briefly elaborate upon the four truths. Those who seek liberation must learn the four truths. 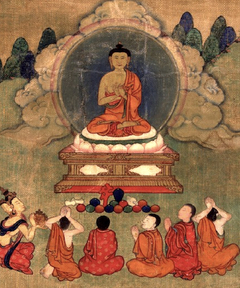 1. The Truth of Suffering

2. The Truth of Origin

3. The Truth of Cessation

4. The Truth of the Path

According to some, saying that whatever is the result of a cause that is the origin must necessarily be true suffering would entail that the bodhicitta in the mindstream of noble Maitreya, which arose after earlier thoughts of desire in the mind of Devadatta, would necessarily be true suffering, since it is a result that has the origin as its cause. If this is accepted, one might respond by saying of the same subject that it is not true suffering, because it is the true path. If the interlocutor says that the reason is not established, one would reply that it is indeed, since what is referred to is wisdom in the mind of a noble one. Some say that it does not follow that whatever is a sensation must necessarily be suffering. They give the example of pleasant sensation, which is a sensation but, so they claim, is not suffering. To this one might respond that a pleasant sensation is indeed suffering, since a sūtra says, "Any and all forms of sensation are suffering," and it is a sensation. Some say that both the environment and its inhabitants must necessarily be suffering. But this would then apply to the world that a buddha creates through his own self-manifestation and to the sambhogakāya too. Many claim that whatever is suffering must necessarily be the origin. To this one might respond by saying that a stone would therefore have to be the origin, since it belongs to the truth of suffering. Others assert that cessation and the path have a common locus. It would follow from this that conditioned and unconditioned phenomena must have a common locus, since they correspond to true cessation and the true path. But there could be no such common locus, given that permanence and impermanence are incompatible. The interlocutor might claim that it is not proven that these two truths correspond to the conditioned and unconditioned. It would then follow that the svabhāvikakāya must be created, since true cessation can refer to more than the unconditioned and the true path includes more than simply the conditioned true path, and the svabhāvikakāya is true cessation.[3] If this is accepted, then would follow that emptiness must be ignorance, because the naturally pure svabhāvikakāya is emptiness, which would be something created. Some claim that cessation and the path are not of the same essence. In that case, there could be no true cessation in the mindstream of someone on the path of total release of the path of seeing, because there would be no true cessation with the same essence as the true path. Some say that any established basis must belong to one of the four truths. If so, it would follow that space must belong to one of the four truths, since it is an established basis. This might be accepted, but it is not so, since it is neither suffering nor origin and neither cessation nor path. Before the victorious ones and their heirs, I confess any flaws in these points, which, in my confusion, I have inelegantly explained. Through the virtue that is hereby produced, May all infinite beings attain the Victor’s level, And gain the splendour of taking possession Of all the qualities of purity, such as the strengths. As requested by the monk Matibhadra, this succinct presentation of the four truths entitled 'Entry Point for All Seekers of Liberation' was completed on the eleventh day of the waning phase of the month by the fool named Könchok. | Translated by Adam Pearcey, 2022, with many thanks to Sean Price for his valuable suggestions.

There are currently no comments for Entry Point for All Seekers of Liberation.