Zanshin is a term frequently used  for its importance related to spiritual health and efficiency. It refers to a state of awareness – of relaxed alertness. A literal translation of zanshin is “remaining mind.” Before an encounter, it can be described as the calm before the storm – clear resolve or, as Maestro Urban refers to it as super attentiveness. 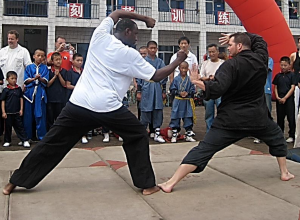 In karate-do, zanshin is the state of total awareness. It means being aware of one's surroundings and enemies, while being prepared to react. During the encounter, it is more accurately defined as “seme” or the pressure that is brought to bear by “ki ken tai no itchi” or “zen ken ishoa”: “Intrinsic energy, mind & body as one.” In kyūdō (ancient Japanese martial art of archery), zanshin means the body posture after the loosing of an arrow; the posture is intended to reflect the higher meaning of zanshin, which is a mental and spiritual aspect maintained before, during, and after an action. Zanshin is the continued state of spirit/mental alertness and physical readiness to meet the situation (such as an opposing attack) that must be maintained when one returns to Kamae, or ready posture/fighting stance, after attacking. It is one of the essential elements that define a good defence or attack. There must be both a strong sense of focus and awareness. Zanshin is practiced as general awareness of one's surroundings, of which your Ukete is just a small part, and students are trained to maintain a continued state of mental awareness and physical readiness beyond the dojo walls and into daily life. After an encounter, it can also be described as “the light that is left after the sun has set,” or as Maestro Urban put it, “it ain’t over ‘till it’s over!” In Jiyu Ippon Kumite or a self-defence situation for example, it is important to stay in a state of zanshin. When two students face each other, both in kamae, they should not concentrate or focus on the other’s eyes or any other part of their partner’s body. If they focus on their opponent’s legs they will probably be hit by their opponent’s hands. The opposite is also true; if they focus on their opponent’s upper body then they will probably be hit with a kick. You should see all. Your eyes should feel as though they are looking at an object in the distance behind the opponent. To this end, the Samurai utilized “enan no metsuke,” or “the far away mountain gaze.”