“Wing Chun” is a style of Martial Arts which translates literally as “singing spring fist”.

Yip Man was the first to establish a modern martial-arts school in Hong Kong, in the early 1950s. He was bron in Foshan, Guandong (South China) and first learnt Wing Chun there as a teenager.

A Significant Encounter in the Street

His fortunes changed when a relative supported his move to the prestigious St. Stephen’s College in Hong Kong. It was here that a significant encounter was said to have taken place; Yip Man witnessed a foreign police officer beating a woman, and managed to strike down the officer himself, using his martial arts skills, before running back to school. After this incident, a classmate spread the word. Soon Yip Man was invited to see an old man, who was a Martial Arts elder, a fellow disciple of Yip Man’s old Master. He resumed his training with this man, called his “Martial Uncle” by Chinese tradition.

Return to Mainland China to become a policeman 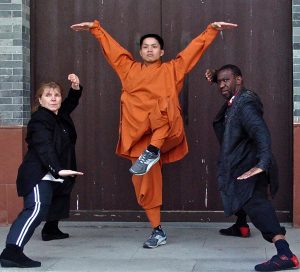 Several years after, Yip Man returned to his hometown of Foshan, Guandong where he became a policeman. He privately taught some of his friends and colleagues Wing Chun, and people became aware of how much he had improved his techniques due to his training in Hong Kong. The Japanese Occupation (1931-1945) saw Yip Man leave Foshan for one of his student’s village houses. After the War, he returned to Foshan serving as a police officer, though he was to return to Hong Kong by 1949.

The Opening of his Martial Arts School 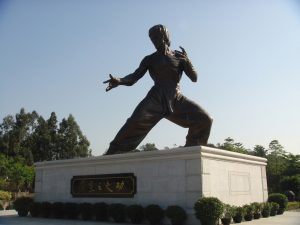 Yip Man set up a Martial Arts school, which was initially unpromising. Students were generally uncommitted and rarely stayed more than a couple of months. However, several of his student trained hard, and became highly skilled. They started their own schools, and fought against other Martial Artists, beating them and thus strengthening the reputation of Yip Man’s school. 1967 is an important year in the history of Martial Arts, as Yip Man and several of his students started the Hong Kong Wing Chun Athletic Association. Wing Chun was now formalized as a discipline. Sadly, Yip Man died just five years later, in 1972. His career had shaped the future of Wing Chun, introducing a standardised training system. Furthermore, through the efforts of his students, who included Bruce Lee, Yip Man’s work was to become known to the world, as the fame of Wing Chun spread internationally.

1893: October 1, born into a wealthy family in Foshan, Canton, China 1909: Studied in St. Stephen’s College in Hong Konh 1917: Became a police officer in Foshan; Taught Wing Chung privately 1937 – 1941: Fought in the army against Japanese invasion 1941 – 1949: Recruited by the “Natonalist Party” as a police officer 1949: Lost most of his fortune and fled to Hong Kong 1950: Set up the Wing Chun martial arts school in Hong Kong 1953: Bruce Lee studied in his school and became a life time friends 1967: Build Wing Tsun Athletic Association in Hong Kong 1970: Retired from teaching martial arts 1972: December 2, died from throat cancer in Hong Kong

There are currently no comments for Yip Man, Master of Wing Chun by Nikita Hayward.