Cultivating more control over our lungs can bring many benefits to our mental and physical health. Is it time to relearn breathing?

Within a mere 10 seconds of being born, the shock of the brave new world startled your lungs into action as you gasped your first breath. And they haven’t stopped working since, averaging around 16 breaths a minute for a resting adult – or 23,000 a day. By the time you reach 30, you will have inhaled and exhaled roughly 250 million times. You’d think, with all that practice, we’d all be experts at respiration. What more could we learn about this most basic instinct?

A particular frequency of breath can be especially restorative, triggering a ‘relaxation response’ in the brain and body

The answer may be “a lot”. Recent scientific research has shown that while quick, shallow and unfocused breathing may contribute to a host of problems, including anxiety, depression and high blood pressure, cultivating greater control over our lungs can bring many benefits to our mental and physical health. Intriguingly, scientists are finding that a particular frequency of breath – at around six exhalations a minute – can be especially restorative, triggering a “relaxation response” in the brain and body. Besides inspiring life coaches and fitness gurus, breathwork has also started to draw the attention of major corporations – who hope that the practice could help staff to focus their minds and to cope with the daily stresses of their job. ‘Speed ramp to relaxation’ 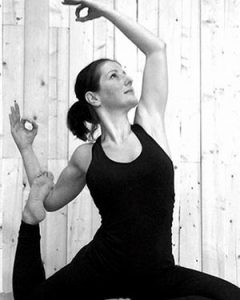 Like the current fashion for mindfulness, breathwork has been inspired by the teachings of ancient texts – most notably Hindu and Vedic scriptures, which have long extolled the importance of breath control through practices like pranayama yoga.
Indeed, you may be forgiven for wondering whether breathwork is simply another name for mindfulness, given that many meditation courses already encourage participants to focus their attention on their inhalation and exhalation. Mindfulness, however, tends to involve passive observation – “watching the breath” – whereas breathwork requires you to actively change the way you breathe. This includes ensuring that you breathe with your diaphragm (rather than the movement of your chest) so that you can fill your lungs with more air, while consciously slowing the pace of your breathing from your resting average.

Those slow, deep breaths set off a cascade of physiological responses that accelerate your descent into a more complete state of relaxation

According to practitioners, those slow, deep breaths set off a cascade of physiological responses that accelerate your descent into a more complete state of relaxation, compared to more passive mindfulness exercises. “It acts as a speed ramp into the meditation practice, helping to calm the mind quicker so that you get more bang for your buck while meditating,” explains Richie Bostock, a breathwork coach based in London whose book, Exhale, will be published later this year. “In fact, I call some of the routines I teach ‘Meditation on Rocket Fuel’ because of the profound effect it has on calming the mind quickly and getting you to that place of no-thought.”
The scientific evidence would seem to agree. Participants with hypertension showed short-term reductions in blood pressure after guided slow-breathing exercises, effects that seem to go above and beyond the benefits of mindfulness without active breath control. A recent review of the relevant scientific literature found that slow, deep breathing can help alleviate the symptoms of depression and anxiety, and it also appears to help relieve insomnia. A study by Hassan Jafari at King’s College London, meanwhile, has shown that deep breathing can improve people’s management of pain. Given these benefits, some scientists have suggested that breathing techniques could even help patients cope with chronic conditions like arthritis. (If you suffer from any medical conditions you should contact a medical professional before trying any new therapy.) ‘Amplifying basic rhythms’ Exactly why slow deep breathing brings about all these changes is still unclear, though a few hypotheses have been proposed. One promising idea focuses on the sensory nerves around the chest – the effects of which we feel whenever we fill our lungs to the max. “You can tell just by taking a deep breath how much it is a mechanical act,” explains Donald Noble at Emory University in the US. That feeling of pressure comes from a set of stretchy sensors that gauge the expansion of the lungs. The chest movement produced by the relaxation of the diaphragm when we exhale also places pressure on the blood vessels feeding into the heart, ultimately triggering another set of sensors (called baroreceptors) in our arteries. 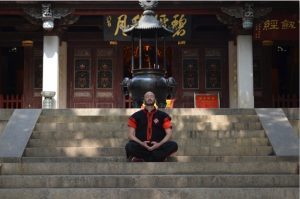 Both types of sensors feed into the brainstem, and Noble proposes that when we take deep breaths, the activity in other regions might synchronise with that steady, repetitive stimulation. The resulting slow brain waves lead us into a state of relaxed alertness. Quicker, shallower breaths simply don’t stimulate those nerves – or the brain – so effectively; you need a long inhalation and exhalation to generate the right brain rhythms.
Just as importantly, the pressure-sensitive baroreceptors, in the arteries around the heart, feed into the vagus nerve. This is an essential element of the nervous system that is thought to be particularly important in dampening the fight-or-flight response after a threat has disappeared. “It allows the body to focus on things that are basically restorative or nourishing,” says Noble – a state that is often known as “rest-and-digest”. By repeatedly stimulating the vagus nerve during those long exhalations, slow breathing may shift the nervous system towards that more restful state, resulting in positive changes like a lower heart rate and lower blood pressure. (To find out more about the vagus nerve and its role in conditions like arthritis, diabetes and cardiovascular disease, read Gaia Vince’s in-depth article at Mosaic, or listen to her radio documentary.) Interestingly, people practicing breathwork seem to find a sweet spot at around six breaths a minute. This appears to bring about markedly greater relaxation through some kind of a positive feedback loop between the lungs, the heart and the brain. “You’re kind of unlocking or promoting the amplification of a basic physiological rhythm,” says Noble. He points out that this frequency can be found in the repetitive actions of many spiritual practices – such as the Ave Marias spoken in rosary prayers and the chanting of yogic mantras. Perhaps those practices evolved through an unconscious recognition of this restorative breathing rhythm and its capacity to send people into a relaxed but focused state of mind. Besides improving cardiovascular health, the slower breathing rate of six breaths per minute also seems to be optimal for pain management, according to the study by Jafari. This may be due to the psychological comfort that comes from slow breathing, as much as any direct physiological changes to the pain sensitivity. “We believe psychological effects, in particular changing one’s attention and expectancies, play an important role in the analgesic effect of these techniques,” he says. 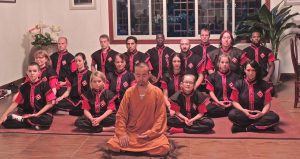 Can tech help? As the evidence for the benefits of deep breathing builds, we may be hearing a lot more about the power of controlled breathing – in books and magazines, on TV lifestyle programmes and at work, as more companies attempt to teach breathing techniques to improve employees’ management of stress. Bostock is one of many coaches who now offer breathwork retreats and corporate workshops. He says that interest has “exploded” recently, with clients including large banks, management consultancy firms and tech companies. They are partly drawn by its simplicity, he says. “You don’t have to have had experience meditating or practicing mindfulness. Once you learn how the breath affects your mind and body, you now have a quick and easy way to change your state, whether it’s to decrease stress and nervousness, increase your energy and focus, and even aid in creative problem solving.” In the future, our journey into deep relaxation may be guided by devices that record your physiological responses to the breathing exercises. For example, one recent trial immersed participants in a virtual reality beach at sunset. Their heart rate variability was illustrated by clouds on the horizon; the more relaxed they became, the clearer the sky. The immediate feedback appeared to ease their journey into that relaxation response – and once they had reached it, a campfire lit up on the beach, reinforcing the sense of having attained their goal. That, in turn, helped them to re-enter the relaxed state during a later cognitive test, boosting their concentration. There is already a plethora of smartphone apps that claim to work along similar lines, though they have not all been rigorously tested for their efficacy. Yoga practitioners have, of course, been reaping these benefits for millennia – without such technological aids. The latest scientific research simply helps us understand the reasons why these practices are so beneficial, outside of their religious or spiritual context, and to find potential new ways to maximise them. If you regularly suffer from stress, it may just be time to breathe some long sighs of relief. David Robson is the author of The Intelligence Trap, which examines evidence-based ways to improve our decision-making and learning. He is @d_a_robson on Twitter.

There are currently no comments for Why slowing your breathing helps you relax.