Most of us tend to think of time as linear, absolute and constantly “running out” – but is that really true? And how can we change our perceptions to feel better about its passing?

“Time” is the most frequently used noun in the English language. We all know what it feels like as time passes. Our present becomes the past as soon as it’s happened; today soon turns into yesterday. If you live in a temperate climate, each year you see the seasons come and go. And as we reach adulthood and beyond, we become increasingly aware of the years flashing by.

Although neuroscientists have been unable to locate a single clock in brain that is responsible for detecting time passing, humans are surprisingly good at it. If someone tells us they’re arriving in five minutes, we have a rough idea of when to start to look out for them. We have a sense of the weeks and months passing by. As a result, most of us would say that how time functions is fairly obvious: it passes, at a consistent and measurable rate, in a specific direction – from past to future.

Of course, the human perspective of time may not be exclusively biological, but rather shaped by our culture and era. The Amondawa tribe in the Amazon, for example, has no word for “time” – which some say means they don’t have a notion of time as a framework in which events occur. (There are debates over whether this is purely a linguistic argument, or whether they really do perceive time differently.) Meanwhile, it’s hard to know with scientific precision how people conceived of time in the past, as experiments in time perception have only been conducted for the last 150 years.

What we do know is that Aristotle viewed the present as something continually changing and that by the year 160, the Roman emperor-philosopher Marcus Aurelius was describing time as a river of passing events. And in the West, at least, many would still identify with these ideas.

But physics tells a different story. However much time feels like something that flows in one direction, some scientists beg to differ. 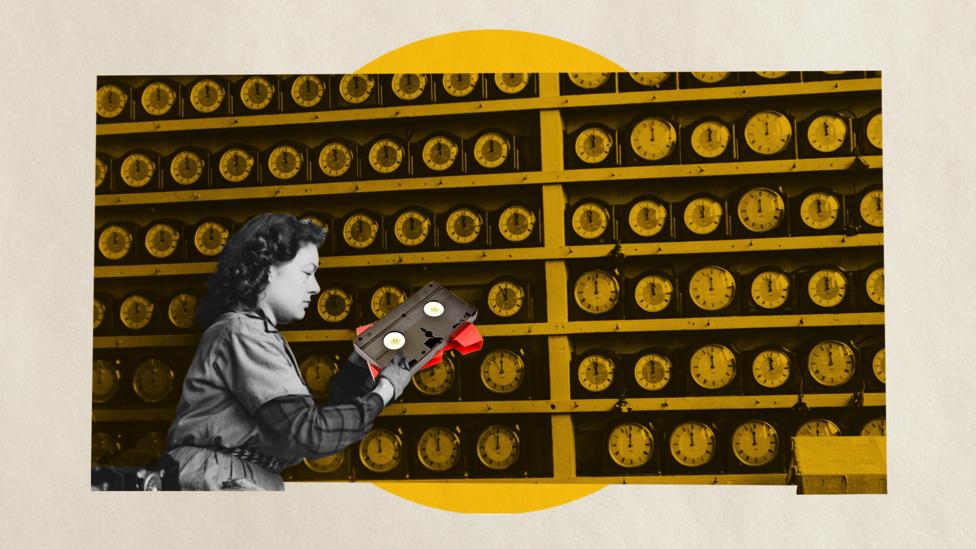 If memories were fixed like videotapes then imagining a new situation would be tricky (Credit: Javier Hirschfeld/Getty Images/Alamy)

In the last century, Albert Einstein’s discoveries exploded our concepts of time. He showed us that time is created by things; it wasn’t there waiting for those things to act within it. He demonstrated that time is relative, moving more slowly if an object is moving fast. Events don’t happen in a set order. There isn’t a single universal “now”, in the sense that Newtonian physics would have it.

It is true that many events in the Universe can be put into sequential order – but time is not always segmented neatly into the past, the present and the future. Some physical equations work in either direction.

One aspect of time perception many of us share is how we think of our own past: as a kind of giant video library, an archive we can dip into to retrieve records of events in our lives

A few theoretical physicists, such as the best-selling writer and physicist Carlo Rovelli take it even further, speculating that time neither flows, nor even exists. It is an illusion.

Of course, although some physicists propose that time does not exist, time perception – our sense of time – does. This is why the evidence from physics is at odds with how life feels. Our shared idea of what the concept of “future” or “past” mean may not apply to everything everywhere in the Universe, but it does reflect the reality of our lives here on Earth.

Like the Newtonian idea of absolute time, however, our belief in how time works for humans can also be misleading. And there may be a better approach.

One aspect of time perception many of us share is how we think of our own past: as a kind of giant video library, an archive we can dip into to retrieve records of events in our lives.

But psychologists have demonstrated that autobiographical memory is not like that at all. Most of us forget far more than we remember, sometimes forgetting events happened at all, despite others’ insistence that we were there. On occasion even the reminder does nothing to jog our memories.

As we lay down memories, we alter them to make sense of what’s happened. Every time we recall a memory, we reconstruct the events in our mind and even change them to fit in with any new information that might have come to light. And it’s much easier than you might think to convince people that they have had experiences which never happened. The psychologist Elisabeth Loftus has done decades of research on this, persuading people they remember kissing a giant green frog or that they once met Bugs Bunny in Disneyland (as he’s a Warner Bros character, so this can’t have happened). Even recounting an anecdote to our friends can mean our memory of that story goes back into the library slightly altered. 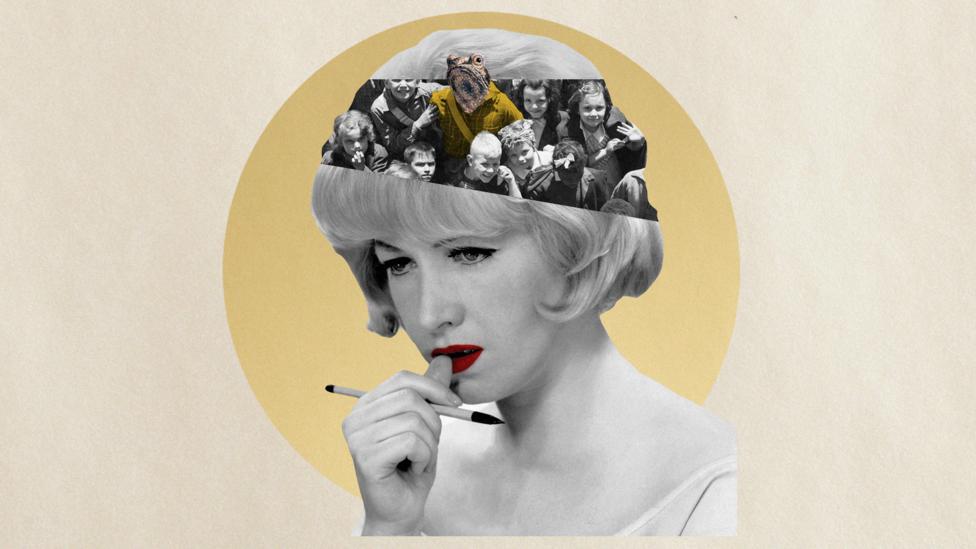 People can be peruaded to "remember" events that never happened to them (Credit: Javier Hirschfeld/ Getty Images)

Another mistake we make is to assume that imagining the future is completely different from thinking about the past. In fact, the two processes are linked. We recruit similar parts of the brain to reminisce or to picture our lives in years to come. It is the possession of our memories that permits us to imagine a future, remixing scenes to preview future events in a window in the mind.  This skill allows us to make plans and to try out different hypothetical possibilities before we commit.

These curious sensations occur as a result of the way our brains deal with time. A baby, with little by way of autobiographical memory, lives constantly in the present. She’s happy. She’s crying. She’s hungry. She’s miserable. A baby experiences all this, but doesn’t think back to how cold it was last month or worry that temperature might drop again soon.

Then gradually a toddler will begin to develop a sense of self. With that development comes an understanding of time, of yesterday as distinct from tomorrow.

Time is not only at the heart of the way we organise life, but the way we experience it

Even at that age, though, imagining one’s self in the future remains a challenge. The psychologist Janie Busby Grant found that if you ask three-year-olds what they might do the following day, only a third can give an answer judged to be plausible. When the psychologist Cristina Atance gave small children some pretzels to eat followed by the option of more pretzels or some water, it won’t surprise you to learn that, thirsty after eating the salt, most chose water. But when she asked them what they would like to have when they came back the next day, most still opted for water. (Adults chose pretzels, knowing that by tomorrow they will feel hungry again.) Very small children are unable to imagine themselves in a future where they might feel differently than they do in this moment.

The experience of time is actively created by our minds. Various factors are crucial to this construction of the perception of time – memory, concentration, emotion and the sense we have that time is somehow located in space. Our time perception roots us in our mental reality. Time is not only at the heart of the way we organise life, but the way we experience it.

Of course, you could argue that it doesn’t really matter whether we perceive time accurately according to the laws of physics. On a daily basis, we can carry on walking without needing to remember that, however flat the world feels while you’re on the ground, it is spherical. We still talk of the Sun rising in the morning and setting in the evening, even though we know that it is the Earth and not that the Sun that is moving. Our perceptions don’t keep up with the science – and we can only create our everyday experience of the world using the senses we possess. 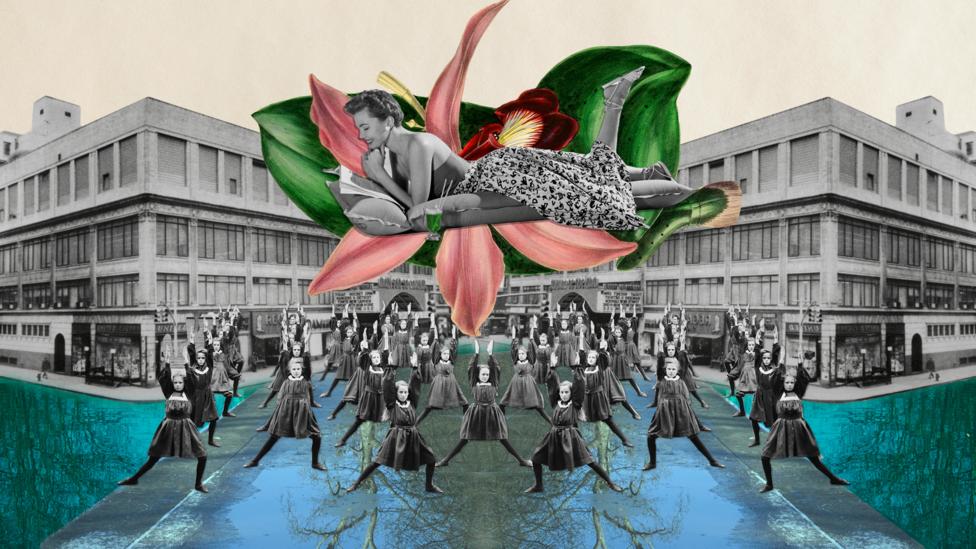 If someone asked you to imagine floating to work on a lilo, most of us would have no problem imagining it (Credit: Javier Hirschfeld / Getty Images)

Likewise, our perception of time is not something we can choose to ignore. However much you learn about four-dimensional space-time, waiting for that delayed train is still going to feel longer than having lunch with your friend.

But even if we can’t change our perceptions of time, we can change the way we think about it – and perhaps feel better about its passing, and ourselves, as a result.

Instead of considering the past, present and future to be in a straight line, we can look on our memories as a resource to allow us to think of the future.

This is crucial. Humans’ ability to time travel mentally, forward and back, is why we’re able to do so many of the things that set us apart – such as plan for the future or create a work of art. And the important role that memory has to play within that isn’t a new idea: Aristotle, for example, described memories not as archives of our lives, but as tools for imagining the future.

Claudia Hammond is the author of Time Warped: Unlocking The Secrets Of Time Perception.