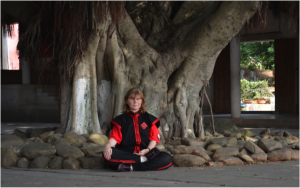 Zen is becoming a hit nowadays as more and more people are paying attention to mental health and meditation. What is Zen? Zen is the Japanese pronunciation of the Chinese character “Chan (禅)”, which is interpreted in many different ways, such as living simply or habits. However, it is over-analyzed. Zen is a word that was originally translated form the Indian Sanskrit term “dhyana” and it means meditation.

Zen as the Feeling of Being Home

There are different interpretations about Zen. It is a state, a method, and most important, it is a spiritual home. Some people believe that Zen is a state of awareness. From their point of view, despite the differences in appearances, everything is equal in the world. Some others see Zen as a method which helps to show the wisdom of every single creature. Finally, Zen is the spiritual home to some people. There is nothing as reliable as home. Zen can bring the feeling of being home to people and help them find their original selves. A very famous monk called Huineng once said that Zen is when a person can remain in inner peace despite all the external temptations. One’s spirit is free when he or she is not limited by the appearance of objects, which is called “Ding” (stable) in Chinese. The highest state of life, according to Huineng, is mastering both Zen and Ding. Zen is also a method for modern people who are very busy to relieve their stress. Through meditation, you will awaken your true nature.

The Story of the Four Friends

Once upon a time, there was a businessman and he had four friends. He was very generous to his first friend and always offered him the best; the second friend was very sophisticated, so the businessman valued him a great deal and always tried to impress him so he could show him off to others; he didn’t give his third friend any special treatment because that friend is very ordinary, however, the businessman was still satisfied with this friend because he was very reliable; as for the fourth friend, the businessman barely noticed him. One day, the businessman was going on a trip to a faraway place. At that time, travelling was a 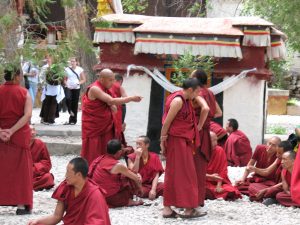 sweaty and dirty undertaking that nobody enjoyed. To make the journey more tolerable, he wanted to bring one of his friends with him. When he asked his friends, all of them rejected him with different excuses, except for his fourth friend. The first friend told the businessman that he is not obligated to go on this trip, which broke the businessman’s heart. The second friend told him: “I know that you are very nice to me, but that cannot be the reason for me to go with you, because there are so many other nice people in the world.” The third friend offered him company, but only for the beginning of his trip. Only the fourth friend followed him without saying a word.

A Lesson of What Is the Most Important in Life

In this story, the businessman is you and the place that he is travelling to is death and the story is trying to tell us what is important in life. The first friend is our body, throughout our lives we are trying to satisfy our body’s desires, which we cannot take away with us when we are dying. The second friend symbolizes money and social status. Most people are fighting for these two things for their whole life, yet they can only be left behind once we die. Families and friend are the third friend in the story. They are very important and precious to us, but even they cannot stay with us until the end of our journey. The only friend that can stay with us forever is our mind/spirit, which are easily forgotten or neglected by us.

What this story really teaches us is that finding our true self and our spirit is a very important lesson in life. Through Zen, through meditating, we can start paying attention to and listening to our heart and find our spiritual home.

There are currently no comments for What is Zen? by Botakuzi Akeerbieke.