Hyakujo wished to send a monk to open a new monastery. He told his pupils that whoever answered a question most ably would be appointed. Placing a water vase on the ground, he asked: “Who can say what it is without calling its name?” The chief monk said: “No one can call it a wooden shoe.” Isan, the cooking monk, tipped over the vase with his foot and went out. 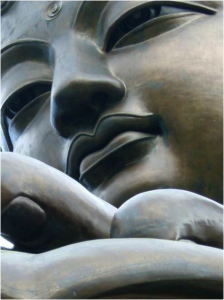 Hyakujo smiled and said: “The chief monk loses.” And Isan became the master of the new monastery. Mumon’s Comment: Isan was brave enough, but he could not escape Hyakujo’s trick. After all he gave up a light job and took a heavy one. Why, can’t you see, he took off his comfortable hat and placed himself in iron socks.

Though the teacher set a barrier for him

His feet will tip over everything, even Buddha.