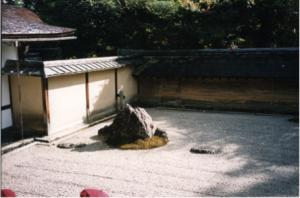 greed, anger and ignorance. These 3 things tie us to the world of desire. This is only applicable to humans.

Concept by Postulation Concept by postulation has to do with the phenomenal world. The five worlds: Sight, hearing, smell, touch, taste, then consciousness.   -God is the prime mover. God an Anthropopathic figure . Like the Hellenic Divine view, God is still just super human.   God is not anthropopathic, but is energy. For the Christian - the individual surrenders to Jesus Christ who carries the load. Only human beings have consciousness. Animals have instinct.

Concept by Intuition The phenomenal world passes by - it is empty. Sunyata. Take a pen. O'Sensei takes it and writes Japanese. We take it and write English. The pen doesn't care. It is not attached to anything. It takes on the personality of the writer. It is empty. Emptiness for the East has to do with a sequence of time. Time is directional and cannot come back so deal with the present - the now. Ichie ichigo - right here now. Every time is the only time, every time is the last time. Mucso - meditation - prayer is the way of tapping into the energy. In the East you internalize the Buddha you receive his energy. A Mantra is a chant that connects you to the real world. Nam yo harin getyro the mantra for the lotus sutra. If you use a mantra incorrectly it will backfire on you.

Four states of space has to do with suffering not as in pain: