Why do the techniques we are taught work so well?

An area of considerable interest (in my experience) among martial arts students is the interface between karate and physics.  Are there any habits we've been picking up that actually make us less effective and should be corrected? What's a good scientific or quantitative way to assess these things? How should I strike to maximize the damage I will inflict, or to achieve the best balance of damage to time, or even to inflict exactly the right amount of damage and not do more than is needed? Etc, etc. With this post, I'm starting what will likely be a long-term investigation into some of these questions. I'll begin with some physics concepts and how they do and don't apply to what we do in karate Do. 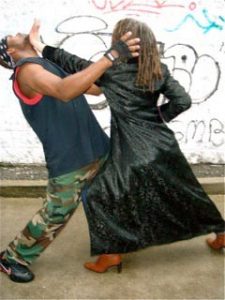 We can start with Force. A more forceful blow will, of course, result in a more effective technique, just as your intuition would suggest. But how can we quantify force? What should we do to maximize the force we exert? Newton's second law, F = m a, tells us that "force" (measured in Newtons) is the product of mass and acceleration, but we must be cautious in how we apply this equation. It is tempting to read it as "a technique which is accelerating will be more forceful than one which is traveling at constant velocity", but that isn't the case. Consider a baseball pitch. Suppose you're standing 10 meters from a competent pitcher, who hurls a baseball at you. As soon as it leaves his hand, there's nothing continuing to accelerate it forward if we neglect air resistance, then the ball would travel at constant speed until it hit you. Constant speed - zero acceleration, which would imply zero force.
But that baseball would hurt, no?
If we factor in air resistance, then the ball is actually slowing down, so it has a negative acceleration along it's direction of travel. So F = m a, in this case gives us a negative force, which makes even less sense. Newton's second law is (of course) a good model of reality (i.e. correct for most intents and purposes), but we must be careful in how we interpret it, (more on force later).
I would argue that the main quantities that you want to look at to estimate the effectiveness of a karate Do technique are momentum, energy, and power (and concepts related to those, that I'll discuss next week). Until next time!
Mr. Snyder, ( Nidan), holds an Honours Bachelor of Science (physics specialist program) from the University of Toronto."