Energy is a difficult term to define, because it can take so many forms. Let's go with "energy is the potential to cause change". If you're well rested and fed (have lots of energy), you can shovel a whole lot of dirt (or something), thereby rearranging the world around you. If you're exhausted, most of that dirt is going to have to stay where it is, because you don't have enough energy to move it. Similarly, a bullet that's traveling very fast (has a lot of kinetic energy) is going to rearrange whatever it hits more severely than one that's casually flicked off a table. Kinetic energy is equal to half of mass times velocity squared (so faster moving techniques have more kinetic energy behind them). Kinetic energy is definitely a useful quantity, but keep in mind that in a karate technique, there's a follow-through (or "impact" ) phase, where you're still using your muscles - there's more to this kind of impact than just the kinetic energy of your hand or foot right before it hits the target. 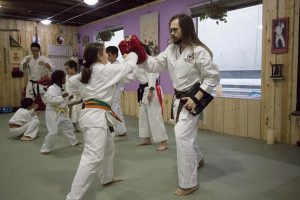 Energy is related to another physical quantity: Work. You can think of work as being the mechanical manifestation of energy. Shoveling all that dirt, for example, is doing work. More precisely, spending energy (that you get from your food, etc) to do mechanical work (physically moving and rearranging things). Energy is measured in Joules (or kilowatt-hours, as appear on your electricity bill, which are defined in relation to Joules).
Power is the rate at which work is done/energy is spent: amount work done per second, or energy spent per second (depending on what exactly you're measuring the power of). Power is measured in Watts, where a Watt is a Joule per second.
In practical terms, an effective technique, I argue, is one that does a lot of work very quickly. So both work and power need to be as high as possible. Why is it important to do the work quickly? Well, because slowly pushing someone backwards and smashing their rib cage with a side kick could be doing the same amount of work. Mathematically, work is force times distance. W = F d. Work is pushing something some distance, but it doesn't factor in time at all. If you push on the surface of an object, that force will be transferred through intermolecular forces through the entire object, causing the whole object to move. If you knock hard on the same surface, you get a vibration (sound). There's a sharp disruption in the intermolecular positions, and that disruption propagates through the material as a vibration (i.e. a sound wave). Hitting even harder, you might permanently deform the face of the object which you struck. The same applies, roughly speaking, to an opponent's body. The same amount of work done over a longer time will tend to move the opponent's whole body, but if done over a short period of time, the zone of impact must absorb more of the work (there isn't time for it to be redistributed), so you are more likely to break bone and destroy tissue. This explains why kime is so important. You want short duration, highly energetic impacts for maximum damage. Okay, so for a damaging karate technique, you want do do a lot of work very quickly. 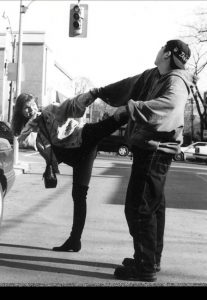 Practically speaking, how do we increase work? W = F d. The d is easier to deal with - one way to increase that distance is by following your techniques through - ending the punch a little ways into the target, rather than right on the surface. But what about the F? I just finished explaining why Newton's second law is a bit tricky to apply in this context, so how do we figure out F? Well, unfortunately, it's a function of how muscles work. This article will be followed up with a second part, after I've found some solid information about what the force curve for typical muscles looks like. That being said, we all know on an intuitive level what more versus less force feels like. Whatever the exactrelationship is between a muscle's exerted force and it's length, rate of expansion, and whatever else it may depend on, we all know what it means to apply more force with muscles. Until next time!
Mr. Snyder, (Nidan), holds an Honours Bachelor of Science (physics specialist program) from the University of Toronto."

There are currently no comments for The Physics of Karate Do by Mr. Harris Snyder part 2.