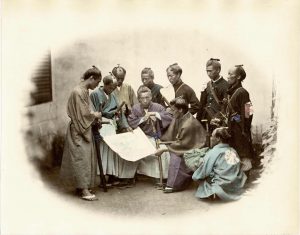 Hand-tinted albumen print from wet collodion negative. A group of samurai are shown gathered in discussion around a map, those of lower rank in western-style tunics standing slightly apart as they watch the deliberations, while a servant squats in apparent readiness for his instructions. Beato’s seemingly innocuous title of ‘southern officers’ identifies the sitters as members of one of the Satsuma clans actively opposing the Shogunate, and further enhances the viewer’s sensation of having stumbled into a council of war

Upper-class woman in palanquin with samurai escorts, circa 1867 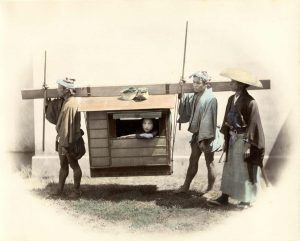 Hand-tinted albumen print from wet collodion negative. For the warrior class and for the nobility the most luxurious vehicles were human-powered palanquins callednorimono, expensive and with a comfortable interior

Portrait of an unidentified samurai in armour, Yokohama, circa 1873-76 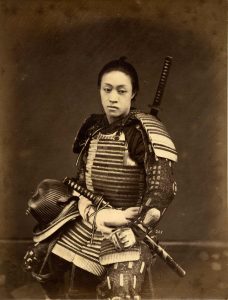 Albumen print from wet collodion negative. An unusually sensitive portrait taken at a time when the samurai class was about to disappear. Despite the edict of 1871 encouraging – but not enforcing – the abandonment of their distinctive topknot and swords, the sitter wears his hair in the traditional style and sports two swords, but is also dressed in full armour. This portrait either pre-dates the 1876 ban on wearing swords in public or was taken immediately afterwards as a keepsake

Kubota Sentarô in armour with retainers, Yokohama, circa 1864 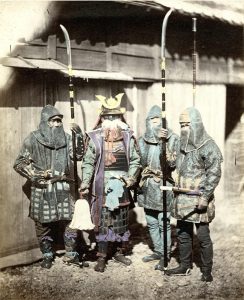 Hand-coloured albumen print from wet collodion negative. As commander of the Shogunal forces

posted in Kanagawa, Kubota had frequent access to the foreign settlement in Yokohama. He was widely respected, among the British, for his openness to western ideas, especially in military matters, and he sought advice on how to train his samurai in modern drill. His preference for British methods at a time when the Shogunate had committed itself to employing French military advisers possibly led to his removal from the command in 1867

There are currently no comments for The last of the samurai – in pictures.