Portrait of Col De Berckheim with senior members of the second Shogunal mission to Europe, Paris, 1864 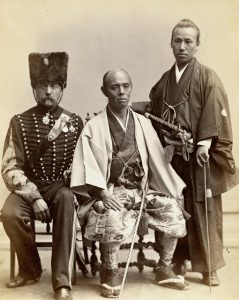 Albumen print from wet collodion negative. A Shogunal mission was sent to France in 1864 to negotiate the opening of Japanese ports to foreign trade. The mission visited the nearby studio of Nadar, where these portraits were taken. In this photograph, the assistant envoy Kawazu Sukekuni (centre), and the mission’s metsuke, Kawada Hiromu (standing) are shown with their escort in Paris, Col Sigismond Guillaume de Berckheim, commander of the horse artillery of the French imperial guard

Swordswoman in fencing outfit, circa 1875. 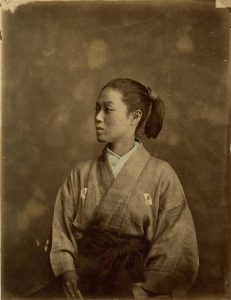 Hand-coloured albumen print from wet collodion negative. Founded in 1873, the ‘Gekken-kai’, or fencing association repackaged traditional samurai fighting into a profitable spectacle for the public. Drawn from the samurai class, group included several women, and their demonstrations of skill with thenaginata, or polearm sword, proved a popular draw in tours across Japan. Although an integral part of the samurai armoury, it was more generally accepted as a weapon used by aristocratic women and often formed part of a samurai daughter’s dowry

Portrait of a samurai commander, c 1870 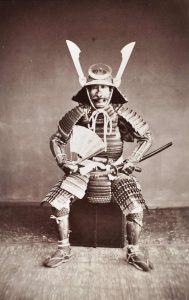 Albumen print from wet collodion negative on carte de visite mount. Little is known about this striking image of a samurai commander but the horns and crescent moon on his helmet suggest a senior ranking samurai

There are currently no comments for The last of the samurai – in pictures Part 2.