The Gitâ requires little preliminary introduction. The scene is laid on the battlefield of Kurukshetra. There were two branches of the same family fighting for the empire of India about five thousand years ago. The Pândavas had the right, but the Kauravas had the might. The Pandavas were five brothers, and they were living in a forest. Krishna was the friend of the Pandavas. The Kauravas would not grant them as much land as would cover the point of a needle. 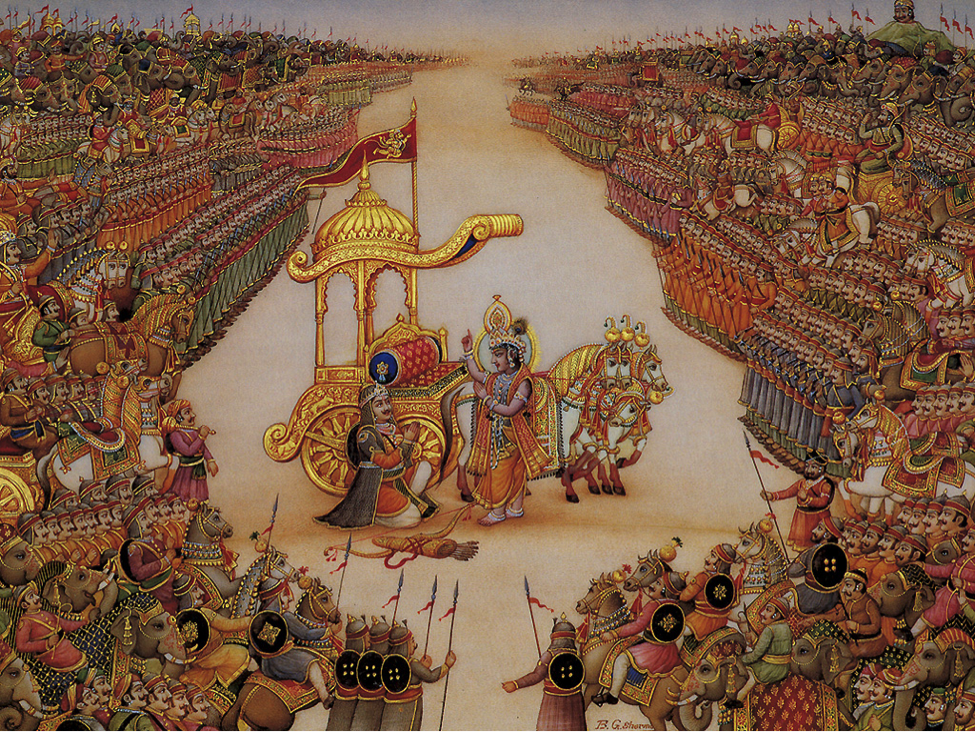 The opening scene is the battlefield, and both sides see their relatives and friends — one brother on one side and another on the other side; a grandfather on one side, grandson on the other side. When Arjuna sees his own friends and relatives on the other side and knows that he may have to kill them, his heart gives way and he says that he will not fight. Thus begins the Gita. The Gita opens with this very significant verse: “Arise, O Prince! Give up this faint-heartedness, this weakness! Stand up and fight!” (Gita, II. 3.) Then Arjuna, trying to argue the matter [with Krishna], brings higher moral ideas, and how non-resistance is better than resistance, and so on. He is trying to justify himself, but in this case Arjuna sees his own relatives and realizes that he cannot strike them. At the core of the situation is the conflict in Arjuna’s heart between his emotions and his duty. The Gita puts a great emphasis on the control of the mind. The mind is likened to the sixth sense, and described as fickle and unstable by nature. As an aspect of Nature, the human mind personifies the phenomenal world, its impermanence and instability. In Chapter VI, Verse 34 Arjuna compares the mind to wind and says: "The mind is very fickle indeed O Krishna, turbulent, strong and obstinate. I think it is as impossible to control the mind as the wind." And in the next verse, Lord Krishna concurs: “Undoubtedly, O Mighty Armed, it is very difficult to control the ever moving mind. However, O son of Kunti, through sincere practice and dispassionate detachment (vairagya), it can be achieved."