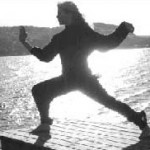 China”, in that many health benefits for both the mind and body are gained through the practice. Taijiquan is commonly referred to in the Western world as the practice of “tai chi”, which translates into “supreme ultimate boxing” in the martial arts realm. It is seen as an art for defence training, and holds many health benefits for those who practice it. The conceptual practice links to both Taoist and Confucian backgrounds, and the popular taijitu symbol of the fusion of the yin and yang. The 5 elements of Taijiquan Though it is characterized for its slow movements, there are several traditions of Taijquan that involve faster and medium paces, and all involve a total of five elements: taolu, neigong, qugong, tuishou, and sanshou. Taolu refers to hand and weapon routines, neigong to breathing and movement, qigong to awareness and meditation, tuishou to response and reactions, and sanshou to self-defence. The practice has gained worldwide popularity and has been compared to the “yoga of China”, in that many health benefits for both the mind and body are gained through the practice. Derived movements from Taijiquan Various martial arts styles are derived from the original Taijuquan (born in Chen Village of China), including the slow-movement version coined “needle in cotton” that has been adopted by a branch of Lama Pai. Taijiquan popularity trends have led to the creation of books, movies, and pamphlets that disseminate knowledge and expertise on the practice, even when several of the techniques or adaptations deviate from original historic routes. One thing is for sure, though: Taijiquan is one of China’s biggest cultural exports to the Western world, and it is continuously propagated both as a martial art and as a vehicle for mental and physical health alike. by Monica Rivera

There are currently no comments for The Five Elements of Taijiquan by Monica Rivera.