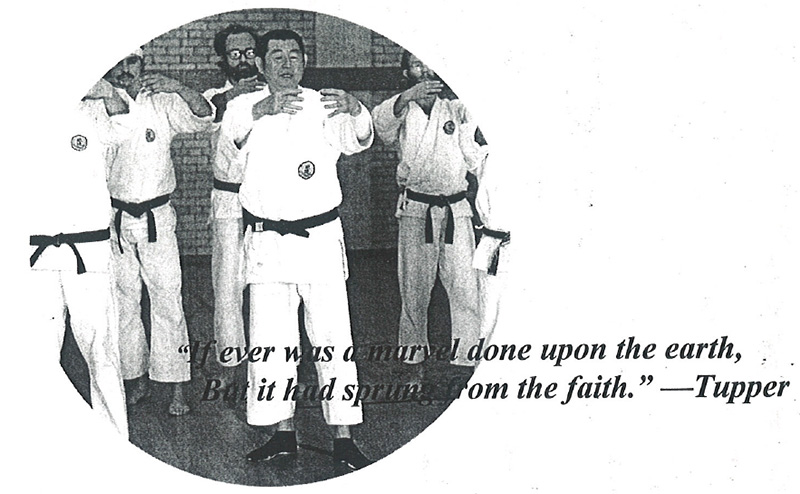 ~by Richard Kim, Ph.D. Sensei and I were high in the mountains overlooking Yugawara.  The air was crisp and we stood silently, breathing and enjoying the clean air. Sensei broke the silence by saying softly, "Stand as if in attention," and I knew from the tone of his voice that special instruction was forthcoming. "Now, step forward as if taking a walk," Sensei continued.  "Raise your hands as if embracing someone, relax your shoulders, and bring your hands together with fingers outstretched about three to five inches apart.  Now, concentrate on the area separating your forefingers and middle fingers." It came to me in a flash.  I was transported a few years back to Shanghai, China, and Jessfield Park.  I was walking in a circle contemplating my fingertips.  Then, after what seemed an eternity, I stopped and Chao Shu Lai, a Taoist monk whom I met prior to World War II, instructed me in a posture that had not made sense to me then and did not makes to me now.  I never questioned him, because I had been taught that "all things come to him who waits."  Anyway, that's what I was told. So here I was in Yugawara, Japan, a far cry from wartime Shanghai.  It was the same posture, but the instruction time would be more explicit.  Probably fate let me to this.  I mentioned it to Sensei.  He was not surprised.

"This posture," Sensei explained, "is the ultimate secret." Ultimate secret?  All sorts of thoughts flitted through my mind.  I wondered what he meant.  I could not envision a secret in a seemingly simple posture as this. "Have you ever wondered as to the seemingly boundless energy of the ancient samurai?" Sensei asked.  "Well, the ancients discovered the secret of recharging the human battery without recourse to fancy frills, diets, and exercises.  As you are well aware, certain diets and exercises are unquestionable useful; however, since man is a spiritual creation, he must harmonize with the universe to get into reality and tap the power.  Only then can disease and death be seen in proper perspective and hod no terror for the man who communes with the power through the secret circle." I had hear that the sages of old had a secret that made the appear supernormal, but I had always supposed the secret was locked in breath control.  Even Sensei had stressed the importance of breath control, and the foundation of yoga was in the science of the breath. "You must remember one thing," Sensei told e.  "Man is apt to deny any phenomena that he cannot see, feel, hear, smell, or taste.  Because power can be tapped through harmony with either (the upper regions of space) and since the five senses cannot verify this, man as a general rule does not have faith in this secret and will discount it as being esoteric.  But reality is reality whether it stimulates our fives senses or not.  That fact cannot change.  This posture combined with prayers or mantras can charge your batteries, revitalize you, cure your illnesses, and made you come into harmony with the great life force." "What do you mean by mantras or prayers?" I asked. "Mantras," Sensei explained, "are words which contain the essence of absolute truth.  They are magical formulas that create wonders if a correct tone and posture is used.  But it must be applied according to the rules.  One thing for sure: In adversity, it gives you complete protection."  In fact, he said, in many religions, especially Buddhism, the mantras are the only key to the great life force. I remembered when I was a kid.  In church, the preacher quoted from St. John, chapter 1, which describes Jesus Christ as "the Word": "In the beginning was the Word, and the Word was with God, and the Word was God... In him was life' and the life was the light of men." But I still could not grasp the connection between the mantras or prayers and the posture - the "circle of power" as Sensei called it.  He then taught me the mantra of the prajna-paramita, explaining that it was the holiest of the holy among all the sutras.  The prajna-paramita literature is comprised of 38 different books, written in India between 100B.C. and A.D. 600.  It is the path of transcendental wisdom.  In Japanese, it called the Hannya-Shingyo.

After a long period of practice since that day in Japan, I have always felt good in a spiritual sort of way.  No aount of adversity, and there has been plenty, has brought me down.  Those that I have taught have told me the same thing.  In the beginning, a sort of electric charge or tingling comes to the fingertips, then later a sort of pull, a force.  Then an ecstatic sort of vibration. You must be careful no to think of any sort of breathing or method of breathing.  Just breathe as usual.  Do not try to empty out your mind.  Just tell yourself, mentally, that you are a creation of God and as such you are free from delusion and disease. If you are for some reason, an any particular day, nervous or troubled and cannot concentrate or cal down, use the mantra method to relax and take away anxiety. Repeat the mantra at least three times, or as many times as you wish until you feel calm and your fingertips tingle or pull.  Then go into "plus one," or positive thinking.  Sensei always said, "There are two kinds of people, those who live in 'plus one' and those who live in 'minus one.'  Ninety percent of the people live in minus one - they are the complainers and the losers.  The very few who live in plus one have it made, because they have found happiness.  There are many methods to plus one; however, the circle of power is unique because it helps everybody.  It is beyond religion, creed, race, color, sex, or age.  And it develops power." Your positive thinking must go along lines somewhat like this: "I am a create of God; I am created perfect, without sickness or disease; I am the 'real' man (or woman)."  The perfect man is one who sees it as it is, without the blinders or "filtering systems" of language, society, or personal experience. As you hold your posture, imagine strongly that life-force enters through your fingertips and spreads all over your body.  Your faith must well up in you and harmonize with the universe. The mantra of the prajna-paramita is the highest mantra which makes one equal to "that which cannot be equaled." In absolute terms, everything is equal, but in relative terms, things are unequal.  The mantra is the essence of truth itself and being the concentrated essence of the whole sutra is equal to the sutra itself.  The mantra is: Tadyatha gate gate paragate para-sam-gate bodhi sva-ha (going, going yonder; going yonder completed).  In essence, it describes "going to the other shore." or reaching enlightenment.  When you repeat the mantra, do not think; just feel with the heart. Stay in your posture for five to 15 minutes, but not more than 20 minutes.  Then close your palms together and stay in silent prayer with feet together. When you finish your silent prayer, rub your hands together as hard and as fast as you can for approximately 36 counts, and immediately take both of your hands and cover your face for a minute or so. This circle of power makes one strong in physical and mental health, and also gives a spiritual foundation that can withstand the typhyoons of misfortune and all demonic forces. ++++++ About the author: Sensei Richrd Kim is the president and founder of the International Martial Arts University in America.  He has written several books on the martial arts and is based in San Francisco, California.