SEN NO SEN – AHEAD OF AHEAD  “LEADING/INVITING THE INITIATIVE” Sen no sen means “before the attack.” Sometimes this timing is also called “mae no sen,” mae also meaning “in front of.” Sen no sen implies that Semete is aware of Ukete’s intention of attacking and right at the time when Ukete is starting to attack, Semete steps in and stops the attack. One distinction between this and the following is that in this case Semete’s action follows Ukete’s physical movement. “When you don't just know when he's thinking, but can dissipate his Satsui or evil intent. Set up techniques, get him to move as you wish. Set him up for the foot sweep. Utilizing inviting techniques. Utilizing feigning techniques. - If you're hurt pretend you're not and vice versa. – O’senesi Kim 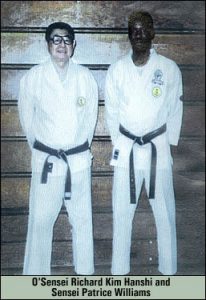 Sen sen no sen is an even more refined concept in regards to timing. The term consists of a repetition of the term “sen.” So this refers to the timing before “sen no sen.” It is the case of initiating a movement intended to lead the attacker’s spirit as well as to draw forth an actual attack, in order to utilize this attack for a defensive technique. This is when you don't just know what and when they’re thinking, but how and when they are planning on doing it so that you can forestall their action and can dissipate their satsui (evil intent). In this case Semete’s action preceeds Ukete’s physical movement. KAKE WAZA As an extension to sen sen no sen, there is “kake waza.” This is charging without the opponent making an attack the instant that there is “kyo” (opening). by O Sensei Kim