The concept in Budo is to stay out of trouble whenever possible.

The best form of self-defence is not to be there in the first place. If that is not possible there is a Chinese dictum – “we beg and we plead not to fight and then we strike!” Although we also profess “karate ni sente nashi,” meaning “there is no first attack in karate,” O’Sensei Kim pointed out that it doesn’t mean you have to wait for the person to hit you. The fight started when they made their intent clear. So our first strategy is to have the correct state of mind, “ai uchi,” meaning “we are ready to die if we must and to take the assailant with us.” The assailant should perceive that this encounter is going to be a battle of life and death and we trust that we will both choose life. 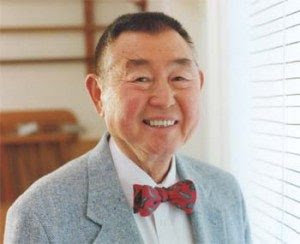 Responding to the opponent’s attack – a counter.

The Japanese character for “sen” can also be read as “saki.” It means “before or ahead” but in the terms “go no sen,” “sen no sen” and “sen sen no sen,” it is an abbreviation of sorts for the word “sente,” meaning initiative or lead. The “te” in sente means hand, so sente directly translates as “beforehand.” In budo, sente refers to an attack or the initiative to attack. As O’Sensei Kim puts it – beat the opponent to the punch.

GO NO SEN – “LATE ARRIVES AHEAD”

Go no sen (post-initiative) is a concept in which a combatant seizes the initiative in a fight after the opponent has already started an attack. In other words, once the opponent starts to attack, the defending combatant performs their technique. The go no sen technique can take various forms, since it depends on the use of the energy and momentum of the attacker. Go means “after.” We move in harmony with the attacker, but it is the attacker that is taking the initiative in the attack and we are mirroring his or her movements. In O’Sensei Kim’s words: “When you know how an opponent fights, you know when to move in on him, or if you’re very skillful you know when he’s thinking (body language) and you can move in ahead of him. Ahead not only of his action but ahead of his thought.” 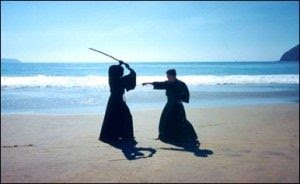 Go no sen involves blocking any attack strongly and then launching a counter attack, also known as “osi waza.” In the case of a jodan oi zuki attack, the defender could shift back into zenkutsu dachi and execute a strong jodan age uke, and then deliver a gyaku zuki as a counter attack. A chudan oi zuki could be responded to by a chudan soto uke and a gyaku zuki. Again, after the counter, it is important to hold zanshin and then shift out of range and back into kamae.

Go no sen is not just a counter-attack, but also a mental state, a level of concentration assumed during combat. It is more correct to say that it is a harmonization with the very movement of attack, not just defense. Go no sen can also be seen as part of a philosophical and moral code, emphasized when one considers the term “DO” (道, dō) or “Way,” meaning that the karateka should never take the initiative in an eventual and inevitable confrontation. As stated earlier, this is also “karate ni sente nashi.”

There are currently no comments for STRATEGIC CONCEPTS pt1 by O’Sensei Kim.