This series of PDF's is from the presentation made by Joan Mlynarczyk on February 20th, 2012 at Hasu Dojo. Part 3:  focuses on Control and Stability + Strength Training. 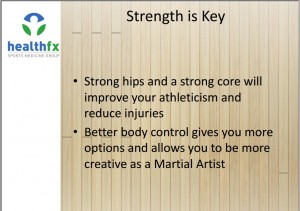 Isotonix delivers nutrient dense solutions which move from the stomach into your intestine in a fast, controlled way. Learn more about isotonic products here or go directly to the following recommended products:

Joan has entered her 3rd decade of clinical physiotherapy and sports medicine practice; her 2nd decade as a “Fellow of the Canadian Academy of Manipulative Physiotherapists”; and her 28 year practicing as a Physical Development specialist for Olympic Athletes. She has been named as a member of the medical teams for the 1992 Olympic Games in Barcelona, the 2000 Olympics in Australia, World Student games, Pan American Games and most recently the 2012 Olympic Games in London. She also worked as the team physiotherapist to the Toronto Raptors, and prior to that she worked at U of Toronto with Varsity athletes for 15 years.  During her career with Canada Basketball she has and has served as an Athletic therapist, Physiotherapist, Strength and Conditioning Specialist, and most recently she is the Lead of the Integrated Support Team who are the team of medial and sport scientists who develop Women’s Basketball players in Canada.  As clinical director for healthfx she treats sports and non-sports injuries, with the goal of help people developing and reaching their Optimal Physical Health.
adobe photoshop cs6 download