“Nam Myo Ho Renge Kyo” – If you happened to visit Buddhist monasteries or are into mantras, there is a chance you may have heard this mantra. Even if this is your first encounter with these Japanese words, we are sure, you will spot a familiar word - “Renge” – our Dojo name. To the uninitiated, this core mantra of the Nichiren branch of the Mahayana Buddhism is about devoting oneself to the Mystic Law of the Lotus Sutra and the word “Renge” means “Lotus Flower”. 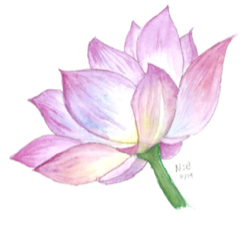 This flower is native to South and East Asian countries - like India, China, Srilanka. With human migrations, it is now found blooming in other parts of the world as well. Two of the essential climatic needs of this flower are: Lots of Sun and stagnant water body. The Lotus rises from the mud, untouched and clean and blooms high in the air towards the Sun. The seeds of this flower can remain dormant for thousands of years until they find favourable condition to germinate. The flower opens with the sunrise and closes with the sunset. These features have given it a sacred and divine place in many Eastern faiths, most notably in Hinduism and Buddhism. According to Hindu creation myth – a Lotus emerged from the navel of the sleeping Lord Vishnu and the Creator - Lord Brahma was born out of it, who created the world. In yoga, the chakras, or energy wheels, are depicted as variations of the Lotus. The crown chakra which is called "Sahasrara" in Sanskrit literally meaning “Thousand Petalled Lotus” represents enlightenment. The unfolding of the Lotus petals, one at a time, in response to the Sun, represents the awakening of the souls towards self-realization or enlightenment. Even the classic yoga posture for meditation is called the “Padmaasana”- another Sanskrit word meaning “The Lotus pose”. As per Buddhist belief, it’s said, when Gautam Buddha started walking, which was within a few minutes of his birth, the Lotus blossoms sprang from the forest floor wherever his feet touched, foretelling his divinity. The well-known mantra “Om Mani Padme Hum” roughly translates into "the jewel in the heart of the lotus." The Lotus Sutra is said to be one of the key scriptures of Buddhism and many believe it to be the final teaching of Gautam Buddha. Lotus has been also been associated with scriptures, stories and arts of cultures related to Egyptian, Zoroastrian, Bahai and Islamic faith. Various parts of the Lotus plant have been used for curing ailments for thousands of years and its medicinal benefits have also been confirmed by modern scientific studies. The stem of the Lotus is a delicacy in Eastern cuisines. Lotus silk made from the plant is one of the most expensive fabrics in the world.             Lotus is the National flower of India, Egypt and Vietnam.

There are currently no comments for Renge – The Lotus Flower Shrawani Ghosh &  Antony Aruldoss.