Its interesting to know how the Lotus, an emblem of Peace, purity and enlightenment has also been used in warfare strategy. In the Indian culture, there are two epics – Ramayana and Mahabharata, which involves religion, history, literature, warfare, sociology and many other aspects.

For the purpose of Lotus, we will use Mahabharata as an example. This Epic narrates the struggle between two groups of cousins in the Kurukshetra( Land of King Kuru – located in Northwest India) War and the fates of the Kaurava and the Pāṇḍava princes and their successors. It is the longest epic poem known and has been described as "the longest poem ever written". At about 1.8 million words in total, the Mahabharata is roughly ten times the length of the Iliad and the Odyssey combined, or about four times the length of the Ramayana. The war lasted for 18 days and fielded many experts of various warfare against each other – Teacher vs. Student, Father vs. Son, uncle vs. nephew, cousin vs. cousin, friend vs. friend (on the opposing side).Each day, the teams arranged their armies in a formation  called “Vyuha” in Sanskrit depending on the objective, risks, threats, opportunities. A great level of thinking and knowledge was employed in the deployment of this daily formation by the commander in chief. Though having a basic structure, these military formations were dynamic and could change based on commands given by the Chief through sounds – mostly Drums and Conches. 17 different Vyuhas of Battle formations were used during this 18-day war described in the Epic. The “Padma-Vyuha” or the Lotus formation which is also referred to as the Wheel formation or “Chakra – Vyuha” was used by the Kauravas on the 13th day of the battle. There is some disagreement among different group of scholars around these two forms due to its similarities (Remember, in Yoga, the energy centres in the bodies are also referred Wheel or Lotus interchangeably?). Side View of Padma-Vyuha

Top View and a reference image 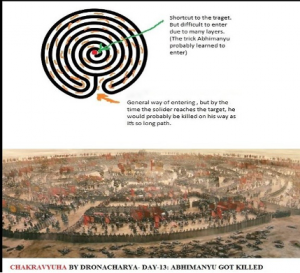 Formation of the disc or Lotus was never visible from the ground. But anyone from above could easily decipher the movement. It was considered a no escape situation for the captive. On the 13th day of the battle, 16-year-old Abhimanyu – the son of Subhadra and the 3rd Pandava, Arjun, was sent into the opponent’s Padma-Vyuha. Although, he could not come out of the formation alive( he only learnt how to enter, why and how is a topic of separate discussion); this young master’s valour and fighting spirit is highly commended even today and he is given the well-deserved respect in the Indian culture. Abhimanyu’s remarkable confidence and his respect and obedience to his masters and elders is till date used as example in many Indian households. So, we see, how Lotus is not a mere flower but holds so much importance in almost every aspect of life – household, medicine, philosophy, mythology, spirituality and even wars. Moreover, Lotus being referred as a symbol of enlightenment as well as used in war techniques makes it so apt for a symbol associated with a Martial Arts Dojo – our Dojo – The Renge Dojo.

There are currently no comments for Renge – The Lotus Flower Shrawani Ghosh & Antony Aruldoss Part 2.