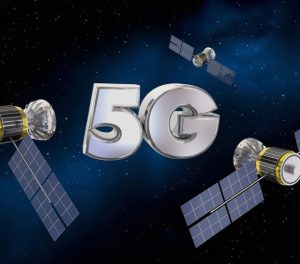 20,000 Satellites For 5G To Be Launched Sending Focused Beams Of Intense Microwave Radiation Over Entire Earth.

Public attention about 5G has been focused on the plans of telecom companies to install millions of small cell towers on electric utility poles, on public buildings and schools, on bus stop shelters, in public parks, and anywhere they want in national parks and on federally owned land. In local urban communities there would be a cell tower approximately every 500 feet along every street. As bad as these small cell towers might seem from the standpoint of constant exposure to radio frequency (RF) radiation in close proximity to the source, perhaps an even more alarming prospect will be the beaming of millimeter length microwaves at the earth from thousands of new communication satellites. The FCC gave approval to SpaceX on March 29, 2018, to launch 4,425 satellites into low orbit around the Earth. [1] The total number of satellites that is expected to be put into low and high orbit by several companies will be 20,000 satellites. [1] 5G will use Phased Array Antennas to shoot Beams of Radiation at Cell Phones These satellites will use the same type of phased array antennas as will be used by the ground-based 5G systems. This means that they will send tightly focused beams of intense microwave radiation at each specific 5G device that is on the Earth and each device will send a beam of radiation back to the satellite. [2] Previous generations of RF cellular communication used large antennas to send a blanket of radiation in all directions. The lower frequencies they used and the broad distribution of microwaves limited the numbers of cellular devices that could connect through an individual tall tower. The much shorter length microwaves used for 5G will make it possible to use small phased array antennas to send and receive signals. Phased array antennas consist of clusters of hundreds of tiny antennas that work together to shoot a ray of energy at a target just like a bullet. A cluster of these tiny antennas can be arranged in a 4 inch by 4 inch matrix. The rays of microwaves they produce will be strong enough to pass through walls and human bodies. If they were not strong enough to do this, then everyone with a 5G smartphone would have to stand outside when using the devices. [2] Each 5G product will also have multiple phased array antennas which will be used to create a powerful beam of radiation back to the 5G devices mounted on electrical utility poles or toward a specific satellite in space. These beams of radiation will also need to be strong enough to pass through walls and human flesh such as a hand or head to reach the intended destination. [2] This means that if you are in a crowded location, such as an airport or on a train, there will be hundreds if not thousands of invisible beams of radiation flying through the environment at the speed of light. As people move in that environment, their bodies will be penetrated by numerous beams of radiation as they walk or as other people walk around them with their 5G smartphones. [2] 5G Phones will be much more Powerful than Previous Phones The effective radiated power of the 5G phased array antennas in phones will be 10 times more powerful than 4G phones. No one will be free from exposure. In addition, 5G beams of microwave radiation will be received and transmitted from new computer equipment, household appliances, and automobiles. Stationary equipment such as Wi-Fi hubs in homes and offices will be permitted to use microwave beams that are 15 times stronger (300 watts) than the signals from 5G phones or 150 times stronger than 4G phones. [2] Please go to Health Impact News to read the entire article. More at www.abeldanger.org https://youtu.be/_Fi_0VTS-D8

There are currently no comments for Petition: 26,000 Scientists Oppose 5G Roll Out Part 2.