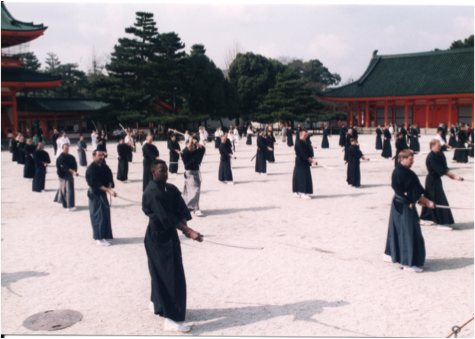 To control opponents you must know kyo (open) off guard. 'The worst off guard is mental off guard. This happens if there is a mental kyo: 1. Emotion becomes unstable . 2. Ki is lost . 3. Attention is fixed only in one place. Physical Kyo 1. A person looses his balance. 2. A person is in between movements. Distance/Timing MAAI Your own effective distance your distance at which you are effective Your opponent's effective distance your opponent's distance at which he is effective . The attack maybe the instant that there is kyo. 1. Both Left foot forward, partner takes a hook at you, step to the side and forward, ( stepping soto outside not uchi inside). Never block inside against a stronger opponent. 2. If the hook is with the lead hand, Step out with the right foot, If the hook is with the reverse hand, Step out with the left foot, With your hand moving in a circle with his punch, not against it, then come straight in and bump him with your shoulder. 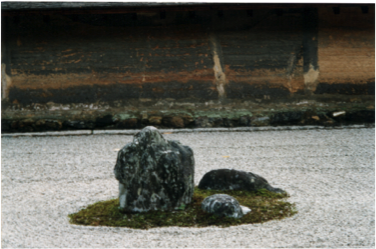 Cut me if you can Do Kyo Yetang was the teacher of Hakuin Ekaku Zenji, who gave the koans t h e sound of one clapping , does a dog have Buddha nature and what was your face before it was born. A samurai came to him, who had been practicing for 20 years and mastered every style. He was puzzled as to which he should teach so he came to Yetang to ask advice. Yetang gives him three punches, knocks him to the ground and kicks him. And all of a sudden, the Samurai achieved satori. Every intellectual function has to do with the world outside. Satori is that sudden insight. Then three other samurai came and asked the same question, but Yetang says no, they weren't ready. So they get angry and start to argue. He tells them to cut him, but one gets up, so again, he says no to all three. They ask, where is your sword? He says he needs no sword, but has a fan. Try as they might, they couldn't touch his arm. Eventually one asked him why couldn't they cut him? - because he was the sword.