Miyamoto Musashi. In the beginning he had a very big match against the master swordsman at the time, Sasaki from Irakuni . Two days earlier, he went to the beach on the island where the duel was to take place and examined everything in great detail. Sasaki had a specially made long sword - this was his specialty and with it he would Banzai attack. - Charge straight in, full So M.M fashioned a boken out of an oar of his boat two Shaku longer than Sasaki's. The day o f the duel he purposely arrived late to annoy Sasaki. He knew that a fight is 90% emotional. 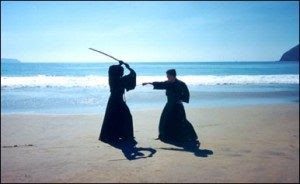 M.M. arrived, Sasaki was raging mad stormed at him. Just as he began his attack M.M. turned around, (he had his back to him), so the sun shone in Sasaki’s face so that couldn't see what he was doing. Sasaki continued his attack and as M.M. felt Sasaki's blade graze him (knowing his boken was two inches longer) M.M. made his cut, killed Sasaki by crushing his skull. Sasaki saw M.M.'s blood where he had grazed his forehead and smiled then fell to the ground dead thinking that he had won.