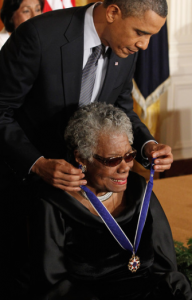 On Wednesday May 28, 2014, Maya Angelou passed from the land of the living to take her place among the ancestors, those who have gone before us.  She will be greatly missed. This was a woman who had experienced a lot, suffered a lot, loved a lot, laughed a lot, who lead by example, who spoke her mind and who told lots of powerful stories.   Born in the deeply racially segregated Southern US, in the state of Missouri, she became a warrior for equality, tolerance and peace.  She was raped by her mother’s boyfriend at age 7 and stopped speaking for several years.  At 9 she started writing poetry.  Later, she was sent off to live with an Auntie in San Francisco for ‘sassing’ a white store clerk and was raised between San Francisco and Stamps, Ark.  She became single mother to a son at 17.  Her deprived situation, and limited options for black women at the time, forced her to work as a prostitute, strip club dancer, restaurant cook and streetcar conductor.  She ran a brothel and became a cabaret performer in her 20s. She had been born Marguarite Annie Johnson, but took the stage name Maya Angelou, a name she kept for the remainder of her life. She went on to write seven autobiographies, including the 1969, I Know Why the Caged Bird Sings, a memoir of the racial segregation she had experienced growing up, and several books of poetry, and to be the recipient of more than a 30 honourary doctorate degrees.  She read the poem On the Pulse of the Morning at President Bill Clinton’s first inauguration in 1993 and supported Hilary Clinton’s candidacy for president.  She wrote and recited the poem A Brave and Startling

Truth at the ceremony marking the 50th anniversary of the United Nations.  Nelson Mandela read Maya Angelou’s poem Still I Rise on his inauguration as president of South Africa.  She worked alongside Martin Luther King and associated with Malcolm X in the civil rights movement. She was a mentor to Oprah Winfrey.  She was one of Glamour Magazine 2009 women of the year. She was awarded the 2010 Medal of Freedom at the White House by President Obama.  She was married at least three times. Like her poem by the same name she was truly a phenomenal woman. Although she had no biological daughters, by her own admission, she had lots – black, white, Asian, Spanish-speaking and native American daughters, fat, thin, pretty, plain, gay and straight daughters, who she claimed and who had claimed her. I claim Maya Angelou and consider myself to be one of her daughters.   In her own words,

our reality, bound to

them, takes leave of us.

and informed by their  radiance,

I thank you, Maya Angelou, for being such a brave warrior for peace, justice, equality and freedom. May you rest in peace in the knowledge that the words you have written, the work you have done and the struggles you have endured have opened door for many others that will forever remain open.   We thank you!