A karateka once went to her Sensei and said "Master, I wish to be stronger!" and her Sensei said "Put on these mittens." And it was awkward, and felt silly, to do karate with mittens on but eventually the karateka learned how to do katas with mittens. "Master, I'm still not strong!" she said, and her Sensei said "Put on these boots with lead slabs in the soles, and put on these glasses that simulate cataracts." And the karateka did so - it was very difficult to move, let alone kick, and the vision-impairment glasses made it hard to focus. Eventually, she overcame these obstacles too and learned karate with the additional impediments. 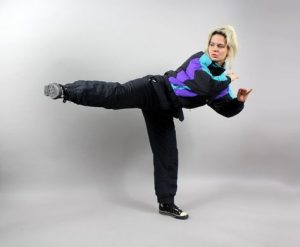 "Master - I mean...I still don't feel strong!" she said, and her Sensei said, "Put on this snowsuit." This was the kind of snowsuit that one might wear on an Arctic expedition - more of an insulated body bag than a 'suit'. It was floppy and hot and made it difficult to feel if she was performing the katas correctly. Finally, after learning how to move properly inside the silly suit, she said "Master, when am I going to be strong?" And her Sensei said "Take everything I gave you off." She did so, and found that she could suddenly see a single tiny bug buzzing on the other side of the dojo, her vision laser-like, and as she moved without mittens, suit, or lead-soled boots, she appeared only as a blur and bisected the fly neatly with a single karate fingernail. "Ah, now I am strong", she said. "Oh damn!" said her Sensei, who just thought it would be funny to make her wear all that stuff. By Isabelle's Boyfriend

There are currently no comments for “Master, I wish to be stronger!”.