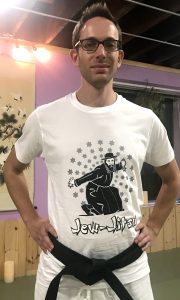 The city that is now Tel Aviv-Yafo used to be two separate entities: Tel Aviv was founded by 60 Jewish immigrant families in 1909, on the outskirts of the ancient port city of Yafo (aka Jaffa). Tel Aviv and Yafo were merged into the same city in 1950. Travel between Tel Aviv and Yafo was a short but difficult distance. What was a 4-hour donkey cart ride across the dunes now takes 20-30 minute by foot on paved roads. A Yemenite "road stop" selling refreshments for travellers was set up in 1902, and what is now the Carmel Market (Hebrew: Shuk haCarmel) was founded in 1920, immediately adjacent. The shuk occupies a single long street, with shops and stands on both sides full of vendors yelling for attention and sales. Today, the shuk is still a top place for locals to go for fresh produce, spices and prepared food. It also sells its fair share of tourist kitsch, which leads us to my shirt. I didn't buy it on my previous visit, unable to think of a setting where I could reasonably wear such a ridiculous and frankly inappropriate thing. Then I came back to the dojo and felt rather foolish, because obviously, where could be more appropriate a place than the dojo? Thank goodness that store in the shuk still had it in stock on my next trip, that's all I can say.