It’s a sad indictment when highly intelligent marine mammals are exploited for military aims Beluga whale with harness discovered in Norway. ‘You have to possess a dramatically impoverished sense 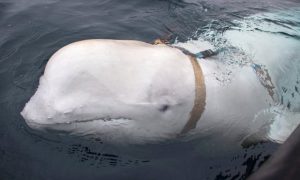 of pathos to look at a whale and completely fail to notice its singular beauty.’ Photograph: EPA Last week, a curious scene played out in the small Norwegian fishing village of Inga. Here, a mysterious white beluga whale appeared from out of the water and proceeded to behave very strangely. Upon the body of this whale there was a strap. Upon the fabric of this strap was written a long chain of human hieroglyphs – “Equipment of St Petersburg”, the writing said. And then – almost as if it were all a dream – the whale disappeared. Although it sounds like something Douglas Adams could have written, I want to welcome you to the dizzying age of weaponised whales. Because as well as poisoning oceans, we humans are also capable of poisoning the minds of the animals that live there. First, some background. If the idea of the Russians using such a beautiful and intelligent organism to further their military aims disgusts you, I should tell you that many countries, particularly the US, have programmes that train dolphins and other species, including sea lions, for military exercises. These marine mammals can be trained to detect mines or assist in object recoveries. They can be trained to do search-and-rescue missions, too. In fact, as of 2007, the US navy was spending $14m a year on its marine programme, involving 75 mine-sweeping dolphins. People who justify the existence of such programmes argue that the military sea lions and dolphins are well-trained and cared for and perform the same role as other service animals such as police dogs or horses. This argument is a good one, but it would hold more weight if in real life police officers trained wild-caught wolves or rode around on plains zebras. They do not do this. Still, the good news is that the US navy denies ever having used marine mammals to harm or injure or kill humans, which definitely makes the whole endeavour legit. Russia, on the other hand, is a little more secretive about its military marine mammals, hence the worldwide interest in the strange, indoctrinated beluga whale. As you can probably tell by now, I find there is something deeply unnerving about the whole spectacle of military dolphins and whales. I’d almost say I’m disgusted by it. In fact, yes, it’s disgusting. But there’s something else … I just can’t stop thinking about that Russian strap the beluga whale was wearing. I can’t get it out of my head. And here’s why. You have to possess a dramatically impoverished sense of pathos to look at a dolphin or a whale and completely fail to notice its singular beauty, its powerful mind, complex communication and feats of cultural brilliance. It takes a certain sort of odious human sensibility to fail to see these attributes and instead wonder at how and where some artificial straps might fit best. “Should they be Velcro?” wonder these faceless military entities in their laboratories. “Maybe a leather kind of harness would work,” they posit, staring at an animal in a tank with one of the biggest brains in nature and, hell, possibly the universe. I used to think that the most far-fetched theme of the Alien movie franchisewas that a grotesquely unscrupulous weapons company would really fly across galaxies to try to collect acid-spitting xenomorphs in order to monetise them as weapons. I was clearly wrong. The films are a fair observation of the human species. If we are happy to capture and indoctrinate whales for military aims, there’s no bar we won’t scrape beneath. And what were the beluga’s straps for exactly? Commentators have speculated they may have been used to hold a camera. Others have speculated that it could be used to house a weapon. Even if it’s the former, what a sad indictment of humanity that we are using a whale to spy on our enemies. And what a demeaning thing it must be for a whale to be paid in fish by one set of people for taking photos of other people somewhere else. And so we humans find ourselves in an unsettling situation akin to that famous Mitchell and Webb sketch. “Wait, are we the baddies?” says Military Veterinarian #1 to Military Veterinarian #2 while testing the strapping on an indoctrinated whale in a glass tank. Veterinarian #2 catches his reflection in the tank and ponders for a moment whether somewhere along the line he really did lose his way. Let me say this. We all have. We really have lost our way. We really are the baddies. So swim, my indoctrinated beluga. Swim for your life, you beautiful white whale. Escape the horrors of human wars before our blood is on your fins. Or, worse, your blood is on our straps. • Jules Howard is a zoologist and the author of Sex on Earth and Death on Earth
https://youtu.be/5pVD5eSfTpo

There are currently no comments for Humanity has truly lost its way if we’re weaponising beluga whales by Jules Howard.