I have recommended to a the students who are testing in this month’s Black Belt grading and all in the martial arts to watch the National Geographic Documentary Free Solo– as an example of extreme focus of the mind, body, and spirit.

What the climber achieves is one of the greatest human efforts of all time in any discipline.  He uses martial arts references to describe what he is doing which was interesting and his determination during an eight year process is to reach his goal is a great example of what it takes sometimes to accomplish something. The attention to detail in technique for the different situations he faced up the climb really was impressive. There are many sacred mountains in martial arts folklore like Wudang mountain for the origins of tai chi and the famous Songshang mountain for the Shaolin monks, Kurama mountain for the samurai, etc. The operative word though is mountain and a mountain moves no matter what’s on it. The mountain represents the Yang or Go energy while water represents the Yin or Ju energy. 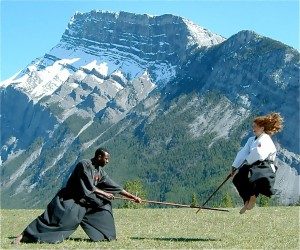 If you ever wondered why  they put all their temples up on mountains now you know one of the main reasons was to tap into nature’s power energy while training. The kids camp this summer is called  “the Mystery of the Mountain Monk” with training and stories around this concept but for anyone who has not done so in a while or ever, go find a mountain to trek on or around and pick up on the energy. Happiness starts with reconnecting to nature and to hike or train on a majestic mountain. Many go mountain climbing over molehills wasting energy trying to make sense of nonsense. Maybe it’s time for a real awakening of the sense energized by the power of nature’s ancient mountains. East does meet west in CMAC and I guarantee you if you get in a car or plane and head west, you’ll find mountains and a different perspective. Hanshi Platt

There are currently no comments for Hanshi’s Note.