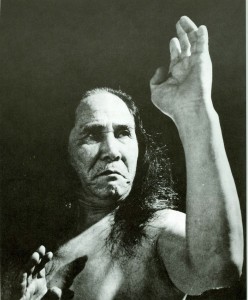 ~by Marian K. Castinado It was near the end of the interview when we realized it. I asked when his father had passes away, and he gave me the date, May 20, 1989. "Come to think of it, what a coincidence!" said Gosei Yamaguchi. "In Japan they are a day ahead." The date in San Francisco, where we spoke, was May 19, 1995. Yet the conversation, while beginning with Mr. Yamaguchi's famous father Gogen Yamaguchi and his life in Japan, had also traveled across the ocean, to the large, sunlit Goju-Kai dojo where we sat. For Gosei Yamaguchi has not merely carried on his father's ways, but has continued them. Think of it" To follow the ways of an innovator, you, too, must innovate, and this Mr. Yamaguchi has done. What Has Gone Before But before you can innovate, you must also understand all that has happened in the past, and Gosei Yamaguchi has a strong respect for Goju's history, noting that "all of Japanese culture in one way or another is incluenced by Chinese culture and civilization.  Karate is no exception.  It came to Okinawa Island first from China.  From Okinawa it went to mainland Japan."  Before then, he notes, there were to styles in Okinawa, stemming from the island's largest cities, Shuri and Naha, the latter bearing the heritage of the Goju system since Chojun Miyagi - the modern Japanese proponent of the system - also studied Naha style, and called his personal system Goju, meaning "hard-soft" style. "In fact this came from China, a city called Fuzhou, one fo the closes to the Okinawan island," says Mr. Yamaguchi.  In "that city and parts of the southern China the have a hard-and-soft style." It is not unusual that Gosei Yamaguchi has a full understanding of the interaction between China and Japan, for at the time of his birth in 1935 in Kyoto - where, he notes "There is a mixture old tradition and modern tradition" - his gather was working for the Japanese government to support eh Manchurian government.  "This was a complicated political relationship - Japan and China," he says.  "Within northern China, Japan created a nation called Manchuria.  The Japanese government did this by setting up a puppet regime, so the Chinese did not consider the area truly part of their country." As an official int eh Machurian government, Gogen Yamaguchi often travelled to China, acting somethign like an attache.  "My father's officeial occupation was representing the Japanese government supporting the Manchurian government," says Mr. Yamaguchi, "but actually his profession was promoting the art form of karate.  My father founded this organization called the Goju-Kai.  He founded karate at Ritsumeikan University, before he even met Mr. Miyagi, and in 1929, my father invented the free sparring form. "When my father met Mr. Miyagi, in those days instead of calling 'karate' they were calling it a Chinese art.  Mr. Miyagi was the first person to call the art form by the name of the style," rather than by the name of its city of origin. "Okinawan Goju stylists consider it Mr.Miyagi's idea to name the style Goju, but from my study, I believe the concept of Goju was from China," says Mr. Yamaguchi.  "I am not discrediting Mr. Miyagi's idea for the name, but there is some documentation  that Mr.Miyagi needed the name for demonstrations, and his students suggested he use Goju.  The past couple of hundred years ago in China they already had the idea of hard-and-soft.  I am not necessarily challenging that" idea that Mr.Miyagi name the style, "but have more of an academic view of history." Just as significant as the debate over Chinese or Japanese origins have been the rifts within Japan itself.  When Okinawa became part of Japan, all the citizens of Okinawa suddenly had to abide by administrative decisions from Tokyo, a political change that "the Okinawan group of people probably did not like," says Mr. Yamaguchi.  "Everything my father [began], like the sparring form, became popular through the entire nation, including Okinawa, but of course, the Okinawan instructors prevented all those practitioners from doing sparring like the Japanese do.  It is changing now, but that is the way it happened. "My father was authorized by Mr. Miyagi to promote this Goju style in mainland Japan.  Mr.Miyagi was living in Okinawa then, so Mr. Miyagi gave all authority to my father to promote Mr. Miyagi's style for him." Perhaps just as significant, Miyagi even bestowed the name "Gogen" on the elder Yamaguchi because the character go - hard - is the same as used in Goju.   In Japanese culture, when a person reaches a certain age and develops a profession, he is often presented with another name.  The elder Yamaguchi had been born Jitsumi on 21 January 1909, "but after Mr. Miyagi gave him Gogen, since then he used that," says Mr. Yamaguchi.  "then I was born to be Norimi, but my father gave me my professional name Gosei.  My younger brother Kishio's professiona name is Gosen.  Then my youngest brother Hirofumi, his professional name is Goshi.  You can tell the all start with 'Go'.  We all use that same connector."

At the end of WWII, in 1945, the family was in Manchurai and had to return to Tokyo.  Darker days yet were ahead: "My father, just because he was working for the Japanese and Manchurian government, was taken by the Russian army," recalls Mr. Yamaguchi.  "Russia sent him to Siberia: [the] worst [place] of all.  He was a war and political prisoner.  Soviet Untion had a tendenacy to do that," he adds, able to find the irony even in this memory.  "When my father left Siberia, he came back to Tokyo, joined his family, and remained in the organization.  He continued the art form.  My father's organization was quite large and strong because many of my father's students had started to open up dojo and teach."  The art was strong in "practically the entire nation - all throughout Japan, even when my father was absent," says Mr. Yamaguchi. "When Mr. Miyagi died in 1953 in October, naturally my father took over the entire organization."  Mr. Yamaguchi continues.  "All the Okinawan Goju stylists, including all of Mr. Miyagi's students, were in our organizations.  But the Okinawan group decided to develop their own organization." Noting the more-than-physical distance between mainland Japan and Okinawa, Mr. Yamaguchi staes that "some of the Okinawan people are self-conscious about associating with the mainland Japanese people.  Because Okinawans considered themselves the originator of this art form - in fact it was not; it is from China - the Okinawan people considered theirs to be the more original art form. "Even though the system was organized by my father, the Okinawan people wanted to establish their own organizations.  Politically they segregated themselves away from my father's otanization.  Therefore you hear the group call themselves Okinawan Goju. "Okinawan Goju" evolves from that administration.  Even the techniques are a little different." Nonetheless, Mr.Yamaguchi explains that "as far as the Goju-Kai organization is concerned, it is still intact" following Miyagi's death, when his highest-ranking student, Meitoku Yagi, took over Miagi's position in Okinawa.  "My father and Mr.Yagi were still in close contact; there was still one organization," says Mr. Yamaguchi.  "But other Okinawan groups did not necessarily support Yagi.  For that reason, other groups of people who studied Goju system from Yagi or even Higaonna, the instructor of Miyagi - Higaonna didn't call himself a Goju stylist, but it was still the Naha system - also separated from Yagi's group...."  Mr.Yamaguchi pauses, then rewords his thought, "...not separated, but created a new organization called Goju.  So that is the situation.  I have no problem with them.  The Okinawan Goju groups are very serious and some of the instructors are very skillful.  I have all the respect for the instructors.  I am not against them at all.  Only in a political sense, we do not communicate in terms of this art form.  We try to respect each other and try not to step on each other's foot."