Gong Xi Fa Cai 恭喜發財
This is the Year of Earth Dog, 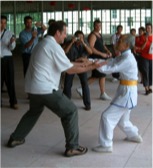 How one breathes is how one lives - this is the old saying in Budo that describes the importance of breathing for both health and self defence technique.
The extremes of calming the self for meditation to powering up oneself for the maximum impact force in technique is achieved through various breathing techniques.
One exhales slower than they inhale to induce an alpha state in meditation and compresses the breath to focus on blocking or striking with speed and power in self defence are two examples of how breathing is used to enhance and assist in either process. The first thing that is affected when one is frightened or surprised is the breathing and the same is true when one gets sick so it is easy to see control of the breath can assist in dealing with both situations etc.
It is the core of the training with the main connection between mind and body being the breathing. The way to handle stress and anxiety starts with mastering of the breathing in those moments. Being proactive with breathing in training can be of great value in life and when practiced on a daily basis especially in the kata training one can develop to skill to a very hight level. Breathing in an intention and out an inspiration, then breathing in the inspiration then out an expression repeatedly over time in action is a powerful method to enhance one’s skills and mindset.
Impression through compression of the breath does not just add power to technique it will focus one’s life-force to overcome fear in the moment of whatever one faces in life. We say the Way is in training; the way in training is breathing.