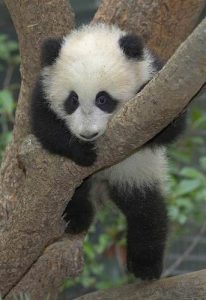 Did you know? There are only about 1,000 giant pandas left in the wild. They are classified as Endangered. The main cause of the panda’s decline now is the erosion of its habitat due to the clearing of areas for crop cultivation. Another reason is the natural die-back of the local variety of bamboo. The panda will not migrate to feed in new areas, because it is hemmed in by human settlements, and so it frequently starves to death. In China, measures are now under way to save the giant panda. To help increase its numbers, special sanctuaries have been established with sufficient space for 500-600 pandas. Both Chinese and American scientists are studying the animal’s habits and instituting conservation programmes.