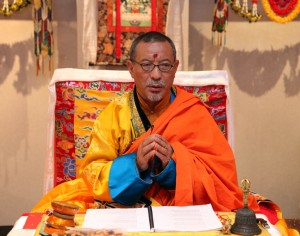 ---------------- Born in eastern Tibet in 1948, Zasep Rinpoche was enthroned as the Thirteen Zasep Tulku (incarnation) at Zuru Monastery at the age of five. After the Chinese Army invaded in 1959, Rinpoche fled Tibet, going first to Nepal, then India. In 1961 he embarked upon ten years of intensive meditation and study with the highly realized teacher Geshe Thubten Wangyal. Rinpoche then completed his Acharya (Master’s) Degree in Buddhist philosophy at Varanasi Sanskrit University in 1975, at which time he was sent to Southeast Asia to study vipassana mediatation and Theravada Buddhist traditions in the forest temples of Thailand. In mid-1976, Rinpoche moved to Australia to translate and teach at the Chenrezig Institute for Wisdom Culture at the request of Lama Thubten Yeshe. In 1980, Zasep Rinpoche accepted the invitation of his Canadian students and came to British Columbia. That autumn, during the visit to Toronto of H.H. Ling Rinpoche, Toronto’s first Gelugpa centre was created. H.H. Ling Rinpoche bestowed the name “Gaden Choling Mahayan Buddhist Meditation Centre” and appointed Zasep Rinpoche as the resident teacher. Continually since then, Rinpoche has given countless teachings, discourses, commentaries, initiations, private interviews and meditation retreats at Gaden Choling for students of all levels. Rinpoche has also hosted many fundraising events for the centre, Gaden Relief, Gaden for the West and other charitable organizations, as well as life cycle rituals such as funerals for members who have passed on. Zasep Rinpoche now resides in Nelson, BC., close to the Gaden for the West retreat centre (Gaden Tashi Choling Retreat). However, Rinpoche is endlessly traveling throughout the year to visit his many centres in the West, re-establish lineages and practice environments at his monasteries in Tibet as well as at several monasteries in Mongolia, leading pilgrimages to the holy sites of Lord Buddha in India, as well as supervise and expand the many relief projects of Gaden Relief. Rinpoche generally visits us at Gaden Choling two or three times a year for a few weeks at a time to teach and offer initiations at the request of his many students here in Toronto. All other Dharma activities at Gaden Chling throughout the year are also carried out under Rinpoche’s advice due to his constant attention to the way our community is growing and evolving over the years. Please read the extensive biography of the entire lineage of Zasep Rinpoche’s here http://community.palouse.net/lotus/VenZasep.htm Biography Sourced from: http://www.gadencholingtoronto.org/about-rinpoche/