Angry White Pyjamas is A book that starts talking about an english teacher who teaches english to high school girls in Tokyo. But decides that he is not complete as A man without a challenge that will improve his physical capability, So early in the story he finds an Aikido dojo and after his first free class he and his friend decide to join the dojo.
MAIN IDEA The main idea from this book is the makeup of so many different things coming together in the martial arts. On how much of an incredible and positive impact it has on people. In the Beginning Robert explained his work and lifestyle, but he felt that there was that empty space inside him that was not filled. He felt that he didn’t have any physical strength/challenge, but later in the story Robert and his friends/roommates find a dojo through other friends who told them about it, once they get there they watch as how things unfold in the dojo. They witness the discipline that is demonstrated, the concentration, and the physique that goes on as well. They go on watching how the sensei shows them how to take on attackers with knives, and the sensei moves so fast that within a few seconds the students get thrown to the ground. This book is based on an older era in Tokyo, therefore the dojos and teachers were extremely strict even more than today. Meaning that you had to deal with pain for long periods of time, when you couldn’t do something you had to learn how to do it right or you will get injured. With that in mind Robert learned more and more every time he trained and he could do things better because he was getting a little bit stronger everyday, and not just Robert but also Robert’s friends were making some good progress, even Fat Frank as they called him, was becoming more agile and he could do the majority of the exercises with less difficulty. As they all kept training, the opportunity to join the Police force was soon gonna present itself, and Robert told his friends that they should all take the course to take their training to the next level. The dojos of today are not as strict as they are in this story, but they still keep a high level of discipline, and they have the same attitude when it comes to trying your hardest. 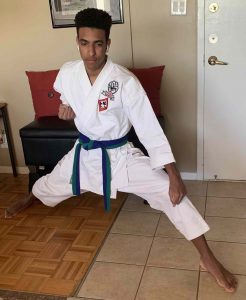 If you don’t try your best, then there is no point in being in the martial arts. Even though both eras of now and then, have their different levels and styles of discipline and ways of being strict they both still share the same idea and meaning to the martial arts.
CONCLUSION In conclusion this is a really good martial arts book, because it really goes into detail about what happens in the dojo and what to expect, as well as what is expected of you when you train. It shows the reader how powerful, amazing and beneficial martial arts can be. Not just beneficial for your body but also beneficial to your mind and spirit. It can also inspire people to get into doing martial arts so they can get discipline, and knowledge of how to handle situations that can end up in them having to defend themselves. But the main components of martial arts is discipline, respect and understanding. Which is why this is such a good martial arts book because
the detail on everything revolves around these components, without them karate would not be karate. by Ian Simons

There are currently no comments for Angry White Pyjamas by Ian Simons.