So that we may properly refer to the legacy of Goju ryu karate developed in Okinawa by Master Miyagi Chojun, we must go back mentally to the time when Kanryo Higaonna studied various styles of Ch'üan-fa under the supervision of different experts in the cities of Fuzhou, Yongchun, Guangdong, Beijing, Huaibei, and other more in China. Higaonna, and almost every native from Okinawa who learned Chinese fighting arts, at the moment of his returning to Okinawa and become a teacher, gave his students a hybrid martial art form, that is, his personal interpretation of the techniques of various types of ch'uan-fa, in combination with their knowledge of the native Tode.

Kanryo’s School emphasized against the other because of the eclectic method of imparting his teachings, the strict adherence to the moral criteria by which elected their prospective students, and the arduousness of the training sessions offered them to who had already selected. Most other teachers and schools taught their methods of Tode without a specific method. Perhaps that is why, in the history of Okinawa, Higaonna's school is equally or more famous than the Itosu Yasutsune1 sensei. Of all students Kanryo, the most famous were Miyagi Chojun and Kiyoda Juhatsu, who began to be his disciples in 1902. Kiyoda started practicing with Kanryo Higaonna one month before Miyagi and stood beside him many years after Higaonna went to another level of existence. Miyagi Chojun came to occupy the position of heir to Nahate, and was recognized as the only student who indeed met with the criteria to be heir to his master. Miyagi was devoted to fully meet its responsibility to spread Nahate, making it an art with a scientific method of teaching, to serve as physical exercise for children and young people, self defense for women, and health maintenance for the older ones. 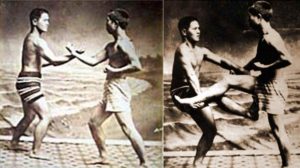 In 1946, after World War II ended, Miyagi Sensei resumed the teaching of karate in Naha Police Academy. As Miyagi lived in Gushikawa because of the war events, several of his students helped him rebuild his home in Naha, while he built a dojo near the residence. There practiced a number of masters who today represent the heritage of knowledge and efforts of the founder of Goju Ryu Karate-do, and many other anonymous Okinawans that today are only seen in photos and could not be identified with certainty. Right after the sunrise morning of Thursday, October, 1953, 8th year of the snake in the Chinese calendar, there came great sorrow and grief to Goju Ryu because that day, in his own bed, Miyagi Chojun Sensei suffered a massive heart attack3 ending his earthly existence.
(Footnote 3) Some historians speak of a pre-heart attack in 1951, in addition to this sudden attack, cerebral hemorrhage and / or stroke, but it is clear that this was a complication product of high blood pressure caused by the events of World War II. We are of firm belief that stress was the catalyst for Miyagi Sensei death at a young age (65 years) it is known to practitioners of martial arts that the eating habits of the Okinawans were studied extensively by many military doctors during the second World War following a series of autopsies on natives of the island killed in battle and / or various other situations. These studies found that the diet of the natives during their life (mostly cereals, fruit, vegetables and lots of fish), was the basis of longevity, fertility and strength, unusual in other countries. According to some writings, even in people over age 85 found that their bodies had no signs of degenerative diseases of old age (arthritis, arteriosclerosis, tumors, cancer, etc.). The writer has been fortunate to visit the island several times and always is a fresh and pleasant surprise, to watch training sessions for heads instructors of various styles of budo founded on the island, where the average age is over 65, and all are active in their daily training routines. The actual capacity to exercise regularly physically to such an advanced age is the benefit of proper nutrition, proper training of budo, and consistent discipline in these healthy habits.
by Takayoshi Sichiyama Alvarez (Takayoshi Sakamoto)

There are currently no comments for 50 Years of Soke Sakamoto Tameyoshi Teachings by Takayoshi Sichiyama Alvarez (Takayoshi Sakamoto).