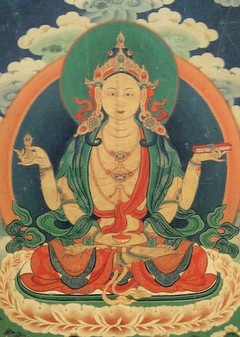 The Heart of the Transcendent Perfection of Wisdom

from the Words of the Buddha In the language of India: Bhagavatī prajñāpāramitā hṛdaya In the language of Tibet: Chomden dema sherab kyi parol tu chinpé nyingpo (bcom ldan 'das ma shes rab kyi pha rol tu phyin pa'i snying po) In the English language: The Blessed Mother, the Heart of the Transcendent Perfection of Wisdom. In a single segment. Homage to the Bhagavatī Prajñāpāramitā! Thus have I heard. At one time the Blessed One was dwelling in Rājgṛha at Vulture Peak mountain, together with a great community of monks and a great community of bodhisattvas. At that time, the Blessed One entered an absorption on categories of phenomena called ‘perception of the profound’. At the same time, noble Avalokiteśvara, the bodhisattva and great being, beheld the practice of the profound perfection of wisdom, and saw that the five aggregates are empty of nature. Then, through the Buddha's power, venerable Śāriputra said to noble Avalokiteśvara, the bodhisattva and great being: “How should a child of noble family who wishes to practise the profound perfection of wisdom train?” This is what he said, and the noble Avalokiteśvara, the bodhisattva and great being, replied to venerable Śāriputra as follows: “O Śāriputra, a son of noble family or daughter of noble family who wishes to practise the profound perfection of wisdom should regard things in this way: they should see the five aggregates to be empty of nature. Form is empty; emptiness is form. Emptiness is not other than form; form is not other than emptiness. In the same way, sensation, recognition, conditioning factors, and consciousness are emptiness. Therefore, Śāriputra, all dharmas are emptiness; they are without characteristics; they are unarisen and unceasing; they are not tainted and not untainted; they are not deficient and not complete. Therefore, Śāriputra, in emptiness, there is no form, no sensation, no recognition, no conditioning factors, no consciousness; no eye, no ear, no nose, no tongue, no body, no mind; no visible form, no sound, no odour, no taste, no texture and no mental objects; there is no eye element up to no mind element and as far as no mental consciousness element; there is no ignorance, no extinction of ignorance up to no old age and death, no extinction of old age and death. Likewise, there is no suffering, no origin, no cessation and no path, no wisdom, no attainment, and no non-attainment.

There are currently no comments for The Heart Sutra.