Now here is my guideline for you all to work in cooperation and practice mutual respect, mutual cooperation for mutual prosperity. My Goju Hall number 001 shall be retired for all perpetuity. Everyone will keep their original Goju Hall number as if it were a social security number or license plate number. 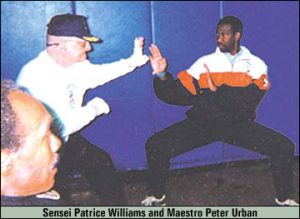 My personal favourite human being and gentleman of quality if I had to pick only one of many is Executive Hanshi Balfour S. Wright, GH-#232 of Schertz, Texas.  The name of his dojo is: “The Karate Dojo”, he is a retired Army Combat veteran and his thinking is fair and square, but not weak and he is his own man. He has always cheerfully supported my Goju Central Monastery and know that I have always been known as fair. Yes, stern and strong, but fair to all, even to those who planned to quit me before they joined. Our living webmaster, Sensei James Price “Ol’ Reliable” of Gojulandia South has a lifetime tenure and appointment by me. In short he will always be what I call “An Untouchable” when it comes to the internet and URBAN GOJUDO website. The country shall be divided up into what I call Gojulandia North and Gojulandia South and Gojulandia East and Gojulandia West. Wallace Platt of Canada will always be an untouchable and head of his own country. Goju Italia = GH=#002 will also be an untouchable. They are monarchs of their own domain as is “Hanshi Skipper Ingram”, of his country in Hamilton Bermuda. He is also the founder of my GOJUDO style in that country through thick and thin over many, many years. Grandmaster Earl Woodbury, GH=#311 wil be an untouchable in matters concerning Puerto Rico and its so called USA Goju Schools. Gianfranco Giacometti, GH-002 will always be in charge of matters concerning his country of Italy. He has been my personal student overseas and here for over thirty years and has always cheerfully supported my life’s work. When the Goju Congress and the Goju Senate elect to have a presiding minister amongst equals, that will be a lifetime appointment. 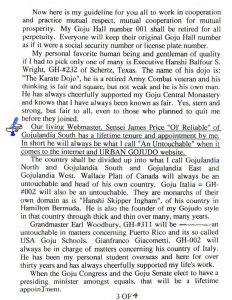 There are currently no comments for ​​​​Maestro’s USA Goju “Last Will and Testament”.